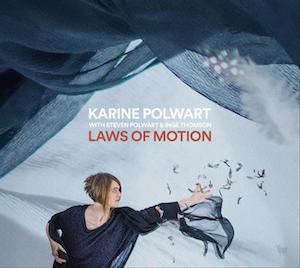 Karine Polwart’s Laws of Of Motion has the breadth of sky, the depth of earth and the length of history all cram packed into ten of the most imaginative, literate songs you’ll hear any where, any year. This is a record of audacious ambition.

Polwart is still no doubt anchored in the genre of folk, where she is a perpetual award winner, but she swims in various different musical seas. Think Joni Mitchell adventurous folk more than Joan Baez.

Laws Of Motion, with Steven Polwart’s guitar and Inge Thomson’s accordion, throws out varied mood and atmospheres. It’s heavy and dark, it is light and bright. It has all the reality of wars past and an imminent nuclear attack in the present and all the hope of a better day.

Laws of Motion is very much grounded in Polwart’s Scotland, a land where she should be crowned poet laureate and a national treasure. Yet, we find ourselves in Bologna, Yokohama and Nazi Europe, then back on Lewis, in Muckhart and and hiding from nuclear fall out in Grangemouth.

All across the various landscapes, there are birds flying (there are always lots of birds with Karine Polwart), people migrating and refugees seeking out some better place.

The songs on Laws Of Motion bring insight into the state of chassis that our world is in politically, economically and environmentally yet deals with it with tender compassion and a rock hard resilience.

Indeed that resilience is as old and hard as the rock of Lewis, an old sage that knows it will outlive one of its off spring, Mary Ann McCloud’s son, now 45th President of the United States of America, and throws out its judgement upon him! I Burn But I Am Not Consumed is an astonishing spoken word achievement; funny, wise and enlightening.

I cannot get enough of it. Polwart’s voice. Her use of words. Her versatility of rhythm and rhyme. Her deep humanity.

Last time we spoke Karine was supporting Martyn Joseph in Belfast. Martyn speaks a lot about songs as companions for the road. Karine Polwart has given us a gang of such companions ending the piece with the mantra, “we are going to be survivors”. I’m hearing you Karine.