INTERVIEW WITH JONNY CLARK, DIRECTOR OF GUARDIANS OF THE FLAME 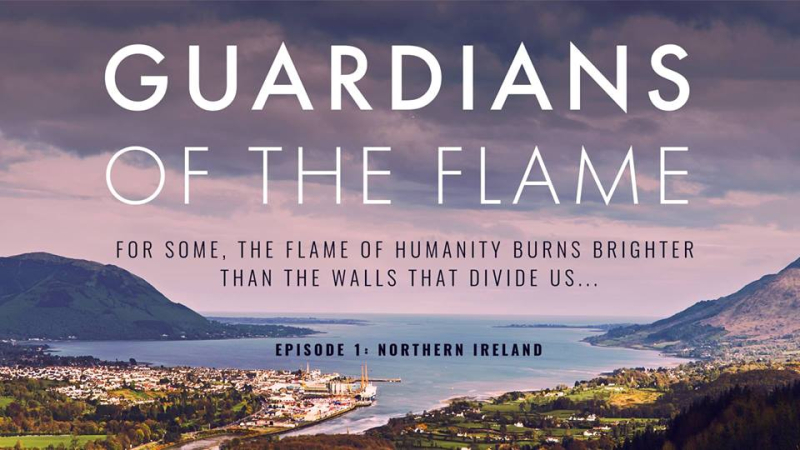 This week saw the premier of a new documentary film Guardians Of The Flame. It is powerful piece of journalism in which Jonny Clark takes us to the centre of the pain and grief of the Northern Irish Troubles through the eyes and hearts of three people who lost loved ones; Eugene Reavey, Beryl Quigley and Alan McBride.

It is a tender and poignant journey as they share their stories and then speak about their response, in the immediate aftermath and indeed until this day.

I am not sure that it was scripted but in the end we are in a discussion on forgiveness and different approaches on how to move on after murder has smashed your heart into pieces.

Guardians of The Flame is a hopeful, inspirational and insightful piece work.

I asked Jonny Clark a few questions about the film…

SS: Jonny, when did you first think about making the film?

JONNY: This kind of film has been a day dream of mine for years, probably since the days when we lived in the lower Shankill from 2002-2010. During that time we would offer scholarships to young people from post-conflict nations to spend a year with us in Belfast. We had loads of Zulus from South Africa, Palestinians, Israelis, Rwandans, Lebanese, Syrians etc. What I was struck by were the similarities in the very different narratives of these countries.

So my original idea was one film comparing the conflicts in each place and highlighting both the toxic and redemptive power of religion.

In September 2017 I was running our annual YWAM reconciliation conference in Lebanon and met an English guy called Josh Eaves. He was passionate about peace building and had been working in Shatila refugee camp in Lebanon as well as with our partner project in southern Lebanon, the Foundation for Forgiveness and Reconciliation. He was also a film maker and worked for a company called Global Fire Creative.

Josh felt that instead of one film we should make a series of films looking at each of these national conflicts with the Northern Irish conflict being the focus of the first episode. Josh was committed to partnering with me to make it happen. Josh is a great guy and a gifted film maker and so together we were able to turn a day dream into a reality.

Why did you choose Alan McBride, Beryl Quigley and Eugene Reavey to concentrate on?

I chose these Eugene, Beryl and Alan because their stories were all quite different. Firstly, they straddled three decades of the Troubles, the Whitecross killings were in 1976, Beryl's husband was killed in 1984, and the Shankill bomb was 1993.

Also their reaction to the killings of their loved ones was also different. Beryl has a strong Christian faith and looks back on a powerful encounter with God moments after the attack on her husband Bill McConnell. She felt a strong compulsion to forgive and is certainly an amazing witness of the freedom that can come from forgiveness.

Eugene's three brothers were killed while watching Celebrity Squares in their living room by the Glenanne Gang. I had met Eugene at one of Tommy Sands' Music of Healing events which we host in our centre in Rostrevor, An Cuan. I was struck by this salt of the earth man but also the stunning story of his Mum.

On the night her sons were killed she lit a candle and said a prayer for the men who killed her sons. She would do that every night for the rest of her life, 30 years. To me I find that story just so excruciatingly beautiful and yet tragic at the same time. I said to Eugene on Sunday night that his Mummy is the hero of the film.

I was keen to interview Alan McBride for the film because his wife, Sharon, was killed in the Shankill bomb, an area in which I had lived and worked for 8 years. I remember early on in my time living in the Shankill I met an old couple having lunch in the old Shankill Mission. They told me that many people in the area were still traumatised by the 1993 bombing.

Alan explicitly says he has not forgiven the bombers because his mother-in-law would never forgive him if he did. But he describes letting go of the anger and hurt. He also details his work which he does along with Eugene Reavey and Stephen Travers of the Miami Showband massacre, with people from all sides of our community.

So they all have unique stories and slightly different takes on reconciliation. They are all works in progress and we try not to create a one dimensional picture of them as saints, but as normal punters dealing as best as they can with the events of the past and each on the journey of forgiveness and reconciliation.

Did the original idea for the film change at all during the making of it?

I think my original aim was to make a film that had a stronger critique of religious nationalism. In the age of evangelical support of Donald Trump in America it felt like this needed to be addressed.Trump-vangelicals are very similar to the church goers that supported Ian Paisley and his ilk, citing their faith as the reason for their devoted allegiance to Queen, Country and God.

In the end however as we zeroed in on the stories of Alan, Beryl and Eugene it felt inappropriate to use their tragedies as a backdrop to taking shots at political leaders and faith leaders. We moved away from a narrative about good guys and bad guys, to a more gentle approach: hearing the stories of victims and allowing for commentary from various religious leaders.

The quote we use for the title of the film comes from Rabbi Jonathan Sacks' book the Dignity of Difference: "Religion is like fire and like fire it warms but it also burns, and we are the guardians of the flame". This is what we were originally building the film around. In the end we have focused more on these heroic guardians who are active builders of reconciliation today rather than critiquing those who are holding us to the sins of the past, of marrying allegiance to God with national or religious identity.

What are your ambitions for the film?

We hope the film will be picked up for TV, but in the meantime we will continue to arrange screenings and in a couple of months it will be available online to purchase or rent. We hope to start work soon on the next instalment of the series where we will look at Lebanon. We ran a Kickstarter to get this project off the ground so we also hope more investment will come in for it somehow.