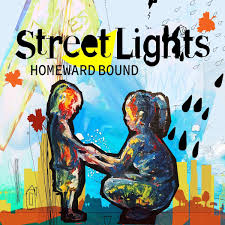 Bono and Gary Lightbody singing Paul Simon together. What a lovely thought. Well, you can download it now!

U2 might be just finishing a long tour and Snow Patrol might just be about to arrive in Ireland on a similarly lengthy jaunt but both lead singers have had enough time to send in their vocal lines for a charity single. Now I’m a lover of the charity single, Band Aid, Sun City and Perfect Day particularly but this one might be as tasteful as any.

This is an Irish-centric song put together by Aoife Woodlock who produces the renowned RTE TV series Other Voices. As she tells it Lightbody was first to commit and with all these things when a major player like him says yes then others will join in the slipstream

Street Lights is a collaborative bundle of artists that again tells the world that when it comes to music Ireland fight way above our weight. -  Conor O’Brien of Villagers, David Geraghty of Bell X1, Colm Mac Con Iomaire as well as Cathy Davey and Saint Sister and more appear here.

The High Hopes Choir are on it too. Which is appropriate as the choir was the brain child of world-renowned conductor  David Brophy as a vehicle to help homeless people change their lives. The single is in aid of homeless charities - Peter McVerry Trust, Simon Community Ireland and Focus Ireland.

It is some of the best of Irish singers doing what they do best, using their art in transformation. It might also be the very best charity single of its kind. Paul Simon’s Homeward Bound is a songwriting classic and the theme fits perfectly. The Street Lights version is beautifully orchestrated and arranged in a way that makes it yearning and hopeful all at once.

Buy it on iTunes now. A song that’s not just good but good for something.