JASON ISBELL AND THE 400 UNIT LIVE AT THE RYMAN 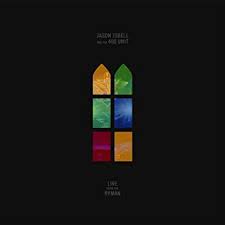 A couple of lines into Bradley Cooper singing Maybe It’s Time in the movie A Star Is Born and I was saying “Jason Isbell”. Now Isbell has been treading the boards for the guts of 20 years with first Drive-By Truckers and later his own The 400 Units. However, it was his “hello to sobriety” album Southeastern in 2013 that introduced him to the wider world. Five years and two more albums later and his work is so distinctive that Bradley Cooper can’t hide the Isbell signature sound.

Time to welcome a live record that can collect Isbell’s best songs from those three records and give them extra bluster with The 400 Units let loose. Of course that changes the songs on Southeastern and Something More Than Free as they didn’t have The 400 Unit on their studio carnations. With Sadler Vaden and Isbell doing their guitar duelling and Mrs Isbell, Amanda Shires, giving some whirling dervish Steve Wickham-esque fiddle, this is a live show of energy and clout.

Recorded over six sold out nights at Nashville’s legendary Ryman Theatre this record doesn’t only highlight the power of the band but also the depth and poignancy of the songs. It is a quick reminder of why we love this guy. Cover Me Up, White Man’s World, Last Of My Kind and White Man’s World. Goodness me.

In the intoxicating live bluster nothing is lost of Isbell’s nuance of heart and soul. 24 Frames’ spiritual cemtax still asks questions:

You thought God was an architect, now you know

He's something like a pipe bomb ready to blow

And everything you built that's all for show

Goes up in flames

The most beautiful of love songs If We Were Vampires has you reaching for your beloved’s hand:

It's knowing that this can't go on forever

Likely one of us will have to spend some days alone

Maybe we'll get 40 years together

But one day I'll be gone

One day you'll be gone

Live At The Ryman is a wonderful celebration of what Jason Isbell has achieved in these last five years. It’s a good assessment of where he’s at. It makes you grateful for the last three records and excites you about the next.