Home Archives Profile Subscribe
PRAISE THE LORD - PUTTING GOD IN GOD'S PLACE, PUTS US IN OURS
UNDER THE SIMPLISTIC SECTARIAN SURFACE - OUR COMPLEXITIES 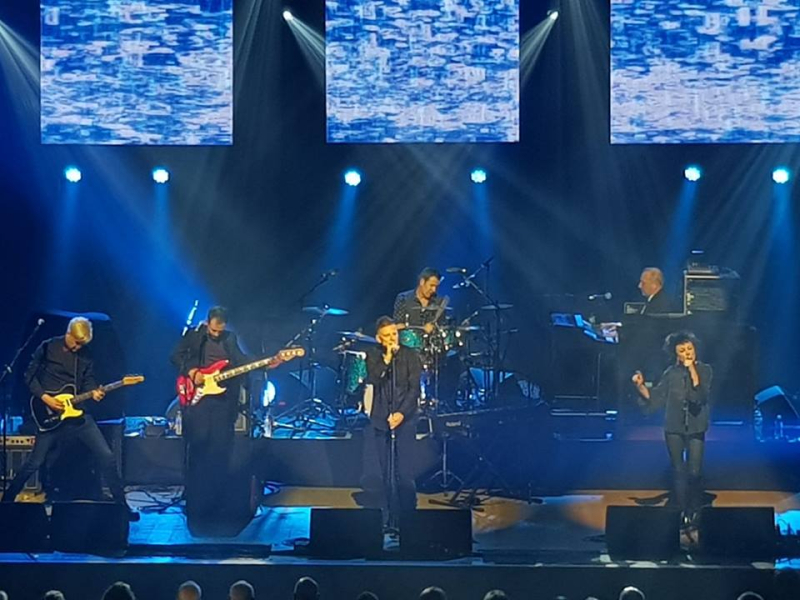 Backstage before the gig, I reminded Ricky Ross and Lorraine McIntosh that they ended their last Deacon Blue tour in Belfast and here they were starting their 30th anniversary Tour in Belfast. Last time they were relaxed, tight as a drum, smooth as a ship called Dignity on a calm far away sea. Tonight their Dignity was ready for some waves. They had done their first dress rehearsal with lights in the afternoon. As I gave a final hug fifteen minutes before showtime I sensed some nerves.

Of course there was no need. As they set up that dinghy, time and time again over the next two hours, there was no sense of anybody drowning. Yes, there were one or two wee nods to each other and maybe a few tentative gropes for smooth song transitions but I was kind of chuffed to be part of the crowd to see the new show before everybody else.

Deacon Blue have a set list dilemma. They have made four albums at their peak before taking a long break. Since then there have been four full albums and maybe another records worth of stuff on compilations. A band that were massive 30 years ago can often draw a crowd who are looking for the hits to rekindle some memories of youth. That can make it difficult for a band to continue to develop the craft and the body of work. For me, it is the bands, like Deacon Blue,  still working at developing the craft three decades on that have my attention. This is not a a nostalgia tour!

Deacon Blue deal with this dilemma so well. There is a large swathe of the set that the nostalgia seekers will enjoy. Loaded, Raintown, Swaying Arms and Wages Day are a stepping stones across the depths of the catalogue around them. Then for the way home Deacon Blue hit them with the hits. Real Gone Kid, Your Town, Chocolate Girl, Dignity and Fergus Sings The Blues fill the last thirty minutes.

And who am I kidding, I love those songs but Ricky Ross and this band are about more. The songs I missed tonight were from the last five years, Bethlehem Begins, Gone, Turn, This Is A Love Song and That’s What We Can Do. My highlights were Stars, I Will and I Won’t, The Believers and Birds. We even got Rae and Homesick. I did say depths!

Throughout, I was struck tonight by the poetry. Now, I have always loved Ross’s turn of phrase but tonight I was taken deeper. Perhaps it was that early song For John Muir. Not many bands write songs about environmentalists from the nineteenth century! Or maybe it was the inclusion of Van Morrison’s Sweet Thing at the end of The Wildness.

Whatever, I was hearing the themes of the land and the heart. There was something Yeatsian in the air. I have spoken recently about how rock music has been mistakenly labeled low brow. Those with ears to hear the lyrics of Ricky Ross would see that had he been a contemporary of Muir he would have been a poet. Rock is the medium to spread the power of the word. Morrison is a poet too though jazz and the blues equally his grá!

After For John Muir, Ross invited the crowd into an adventure and that is what we got. “Over the sea, over the land and the city” we indeed travelled and everywhere looking for home. From Raintown, to A New House to Birds to Homesick to Dignity, there is a thread running through this show that seeks a place of belonging, a soundtrack for all the refugees within us - “a place in the winter for dignity”. As Deacon Blue have done from their very first single they are creating art that is about “HOME, FAITH, WORK”.

As in Birds, thrillingly dedicated to Steve, Janice and Caitlin, someday we will all be free:

We're high above the waves of worry

We're floating on the wind

Cause nothing can begin

To make us want to land again.