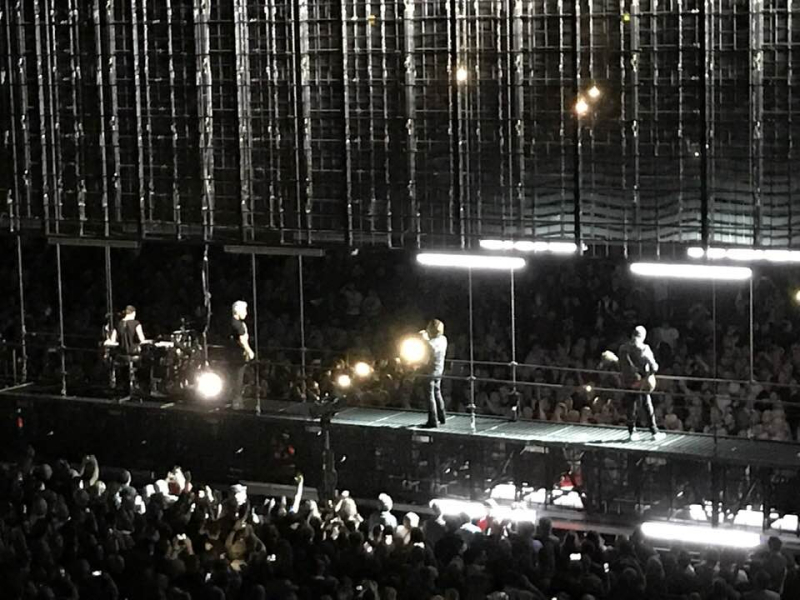 I am the minister of a congregation who know and love their arts. However, like in many heady christian gatherings of people in their 50s and 60s I find that they might not get the rock thing. Too low brow. I remember speaking about U2 at Regent College, Vancouver and telling them that there has been fresh art since CS Lewis, JRR Tolkien and Dorothy Sayers. Indeed the day Lewis died, The Beatles were number 1 in America. More recently, the greatest of all sneakers past the dragons at the door are U2!

During the first night of the Songs of Experience Belfast gig, I wished for a moment that my high brow arts friends in Fitzroy could just get through the low brow guitar riffed loudness. They would love it. I had perfect seats, able to take in the main stage at one end of the venue, the small stage at the other and be face on to the Barricage that doubles as a stage and cinema screen, sometimes both at once.

There was theatre, expensive theatre. There was cinema, extravagant cinema. There was performance art; scary performance art. There was poetry; deep and clever rhymes. There was Church; uplifting worshipful Church. There was more in the social commentary, political critique and the spiritual deep soul delving. This is one extravagant show. Jeff Lynne’s ELO had rocked this same house the night before. It was wonderful but compared to this… ELO were Everton to U2’s Manchester City (the money, the imagination and the delivery).

The first four songs blew me away. I was looking forward to the show but to be truthful had not taken as much interest in this tour. A few seconds into The Blackout and I my heart pumped. What a scene setter for Bono’s near death experience and the state of Trump’s America and Brexit Europe. Add our local Stormont impasse and extinction looks probable.

Then Lights Of Home. Please note immediately that the opening two songs are off their brand new record. ELO had only one song from the past 25 years! This is fresh. In Lights of Home we are still near death. Bono walks up the barricage, his steps lined by stars. It is the stairway to heaven and he kneels at the very gate. This is emotional spiritual stuff from the get go.

Then… heading to the big stage he introduces the band from the north side of Dublin, formerly known as The Hype and boom, I Will Follow. It is exhilarating and those of us there from the start are stoked. It still sounds fresh and contemporary. Immediately into Gloria and to my utter surprise, from nowhere, tears are running down my face. The power. The spiritual power. The first U2 song that I dropped the needle on to. It was like a revival in my soul. My teenage exuberance of faith was ablaze.

If I said it was worth the price of the ticket for those four songs, would I be suggesting that there was something amiss with the rest of the show?! Not at all. When I was in the Boys Brigade drama group, back in the day, I was taught to use the entire stage. U2 use the entire arena! Moving from stage to stage, and Edge and Adam even appearing as if by witchcraft on pop up stages, this band achieve their ambition of making big venues intimate. 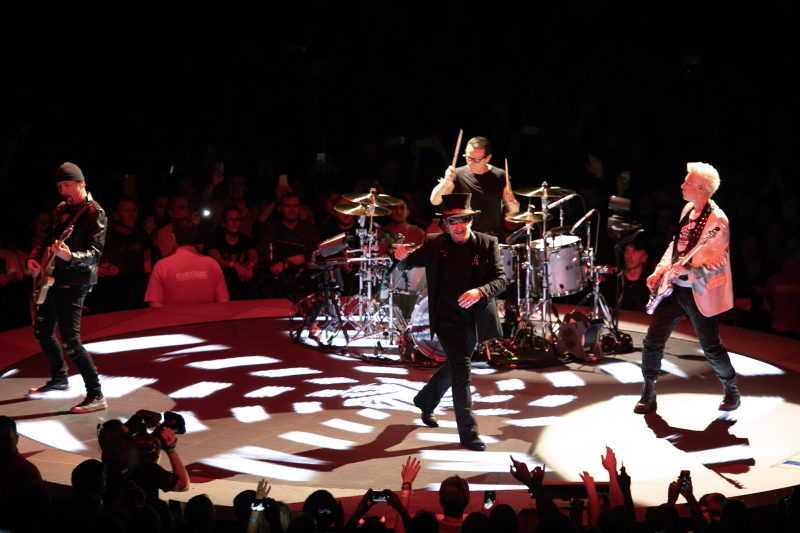 Taking Joshua Tree songs out of the mix was a risk. They had of course toured that entire album last year. Can you, however, leave De Bruyne, Silva and Aguero on the bench and still win the Premiership. You can when you have Jesus, Bernardo and Mahrez on the bench. Tonight, in a set list sense, was about Achtung Baby. Five songs from that album took the centre of the concert.

Speaking to my friend Tim later I couldn't have agreed with him more when he suggested that these songs were written when the band were having relational struggles and spiritual fall out. They're using these songs to help us unpack what we are politically and socially struggling through in 2018. Acrobat never performed before this tour taking us into a section of personal soul searching.

Bono’s chat tonight seemed less staged, more actual conversational. We had a story about driving round Belfast in a tiny car with Squeeze, Adam in the boot and British soldiers outside it! We had shout outs to various place names. I was delighted to hear Fitzroy though it was in context of the streets in Van Morrison’s Madame George.

Into Acrobat and down on the smaller stage Bono, all in make up and top hat, started conversing about the temptations of fame. Enter McPhisto with some rather grotesque camera tricks and CS Lewis’s Screwtape Letters were alive and well again as on the Zooropa tour, twenty five years ago. Bono asked about addictions and after alcohol and chemicals he finished with “The Holy Spirit - I hope so!” 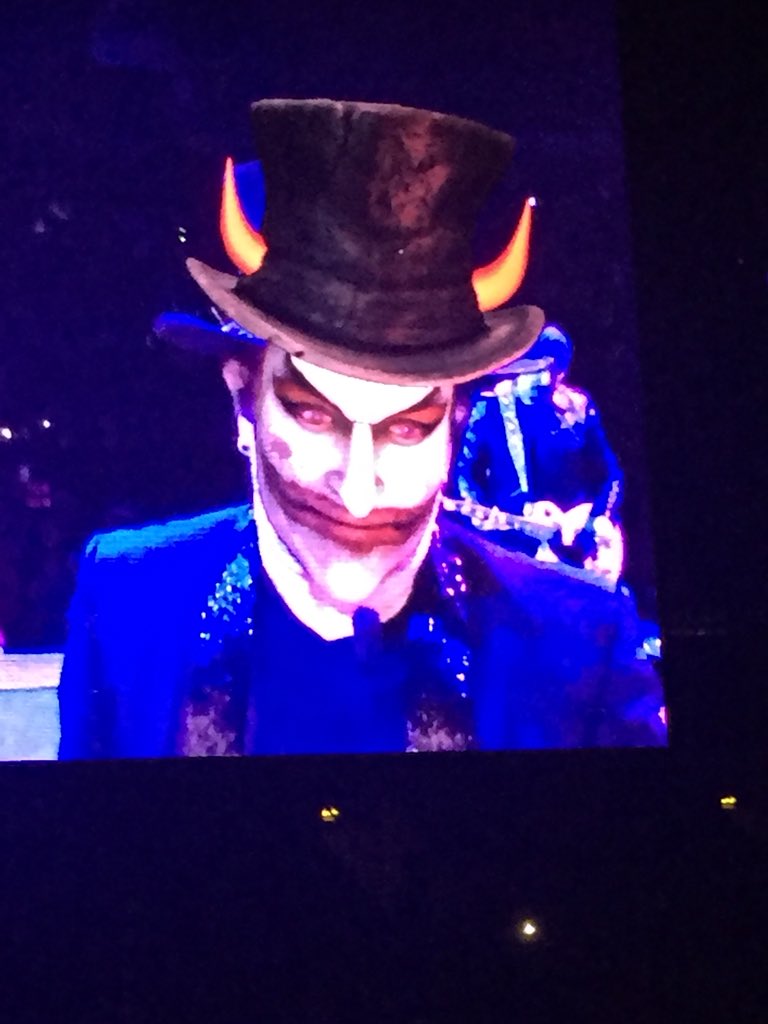 The devil’s buddy claimed cash for ash and the impasse at Stormont, telling our politicians, “Remember when you don’t believe in me… that is when I do my best work.” McPhisto wasn’t missing tonight!

Bringing it home, we had Pride dedicated to John Hume for his peace making. I often wonder has Bono heard of Fr Alec Reid who opened it up for Hume. There was a statement about north and south being “smart and strategic” whatever the border ends up. There was a huge European flag. Women took centre stage of our hope in Ivor Cutler’s song Women of the World.

At the outset Bono had explained the Songs Of Experience album and tour following the Songs of Innocence version. He gave a direction for the evening, “that in the far end of experience you can again recover that innocence. This is the tale we are trying to tell.” Did they? I think so. They took us through their career. We started with spiritual innocence maybe naivety, we lingered over the temptations and the blackout of a fallen world.

The last batch were about uplight. redemption, new world’s of light and one-ness. The final preacher’s punch in the rock show theatre of sermon was that Love is Bigger Than Anything In Its Way… and then…

… the perfect end. During the Songs Of Innocence Tour, a song took unexpected centre stage. In the aftermath of the Paris Bataclan massacre, another evil act in the name of religion, it would have been easy to give up on any idea of God and chant the “I don’t believe anymore” of Raised By Wolves. Bono though held tight to lines from Song For Someone.

"I know there's so many reasons to doubt

But there is a light

Don't let it go out”

Tonight, after all the experience of Zoo Station, The Fly, Vertigo and Whose Gonna Ride Your Wild Horses, Bono walks back down the centre of the SSE in search of that innocence. He sings 13 There Is A Light. The visuals signal Cedarwood Road and there, again as if by magic, a house. Bono walks up and lifts off the roof before pulling out a light bulb. 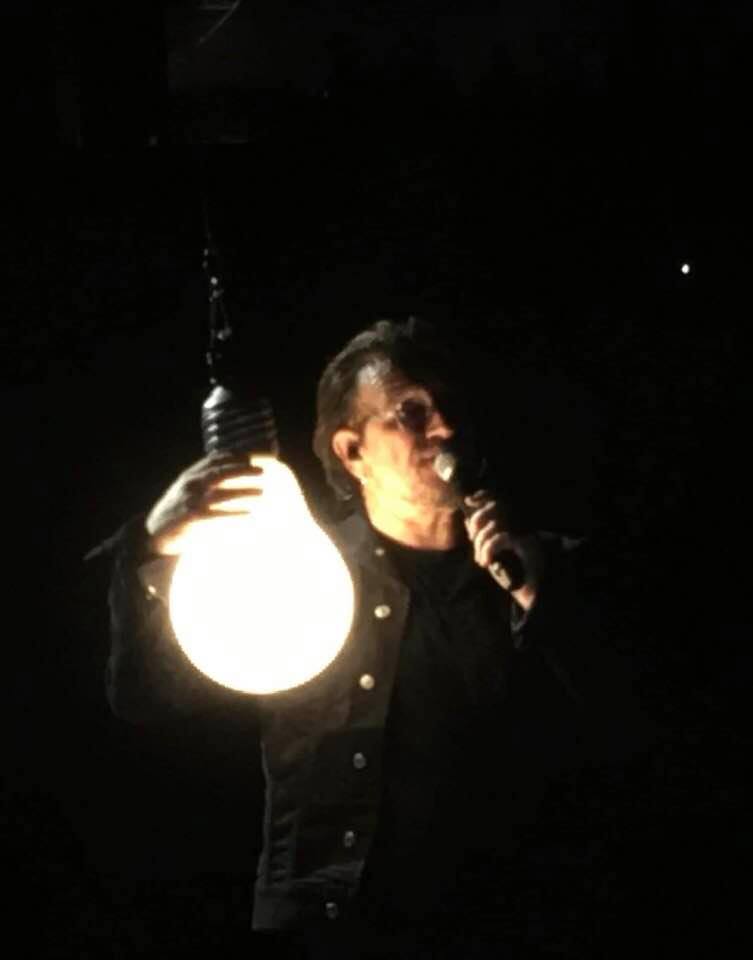 It is the same light bulb that became the image of the Songs Of Innocence Tour… “But there is a light/Don’t let it go out”. Bono throws the bulb into the Saturday night sky of experience. It swings precariously, as it did on the main stage at the very beginning of the Songs Of Innocence concert. Bono leaves… and it swings… benediction, the end… of the night… of this particular U2 era… I think so… still holding on to that light!

Great review Steve. Gloria was the showstopper for me too. I don’t normally sing during a U2 concert but on Saturday night I found myself belting it out with gusto. The whole of the SSE rocking to “Gloria in te domine, Gloria exultate, Gloria, Gloria, Oh Lord, loosen my lips ....”
Hairs on the back of yer neck stuff! I had my 12 year old daughter with me and she was wearing a U2 T-shirt that I owned 30 years ago so there was definitely Experience and Innocence in the house from a personal perspective. Probably one of the most emotional U2 concerts I’ve had the privelage to witness .....