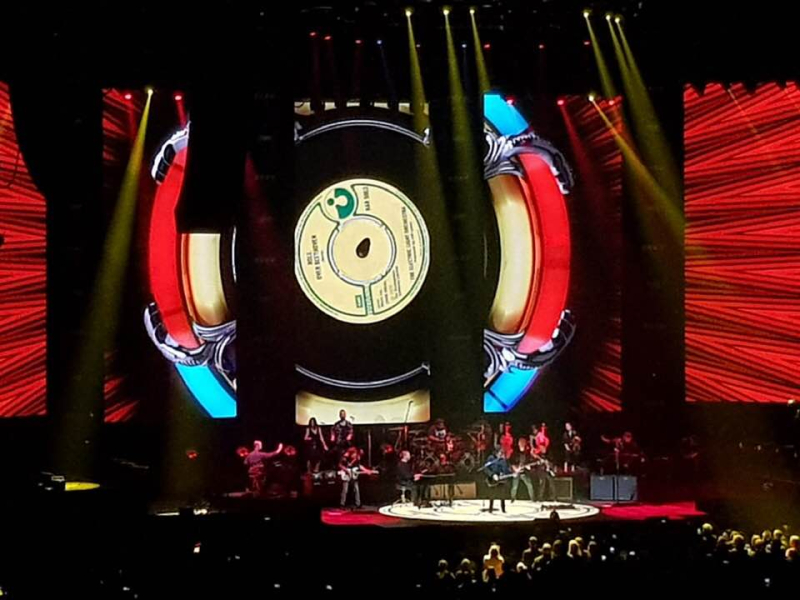 You could accuse Jeff Lynne of bragging before he takes the stage tonight at Belfast’s SSE. The pre gig playlist is made up of songs that he has produced. Tom Petty, Roy Orbison, George Harrison and even The Beatles for goodness sake. It sets out the pedigree. It reminds you of Lynne's his place in rock music history even before an ELO cello gets bowed.

I am no fan of nostalgia concert tours or Beatle rip off bands. Tonight, Lynne with his very own ELO, as opposed to all the other versions, might have been proven guilty of both. Yet, it was fantastic! Did I mention his place in rock history?!

There is a thin line between history and nostalgia. There was a whole lot of nostalgia in this show. Apart from When I Was A Boy from Lynne’s 2015 ELO record Alone In The Universe and Handle Me With Care, a song from his other band The Travelling Wilburys all these songs were written before 1981! The film snippets of The Wilbury’s got the obligatory cheer. I was again surprised at how moved I was with Tom Petty’s face. I haven’t got over his loss!

The fans loved it all. They weren’t young. I imagined a range from 60 to 50, all finding Radio 1 in their teens and if they did then you can be sure that from 1973 to1979 an ELO song was pumping out. For the older ones it might have been Evil Woman or Showdown. For the younger then it would have been Last Train to London or Shine A Little Light. The younger ones might never even have heard of 10538 Overture!

My mate David was a fan before me. He had Face The Music. For me it was Livin’ Thing that finally made me a fan. Then Rockaria, still my favourite as was almost everything on A New World Record. Not that the ELO fans filling the SSE tonight were an album deep sort of crowd. Lynne, machine gun fired the hits, bang bang bang. Everyone a gem!

A New World Record was released at the end of the summer of 1976, the summer I fell madly in love with The Beatles. People were likening Telephone Line et al with The Beatles. My ears were too young to hear it. I guess when Lynne finally produced not only George Harrison and Paul McCartney but actually The Beatles I got his obsession. Tonight I could hear Lennon’s bluesy sounds, Harrisonesque guitar, the harmonies and the fulness of sound of Sgt Pepper and Magical Mystery Tour. I could even hear Paul McCartney doing a song like When I Was A Boy!

Yet, unlike the crude theft that Oasis would do of The Beatles in the 90s, Lynne took inspirations, sometimes obvious but he was also magpie picking other glittery sounds. You can hear The Moody Blues and even post Saturday Night Fever Bee Gees in there too. When Lynne finally patched those sounds together he had come up with this symphonic pop music that was lush, uplifting and utterly beautiful.

Tonight with a crack band of players and singers it sounded deep pile. The sounds washed over you and the visuals too. It was a big symphonic sound and as well as the light show it was impressive. At the end of Mr Blue Sky, before a partying version of Roll Over Beethoven, there was a sense to me that the standing ovation was not just about the last two hours but about those ten years in the 70s when Jeff Lynne with his ELO put the most amazing body of work together.

Love it Nostalgia indeed! I'm sure I would have been word perfect on many fo the songs- even if I haven't sung or heard some of them for 30 years- the power of music you hear in your teens