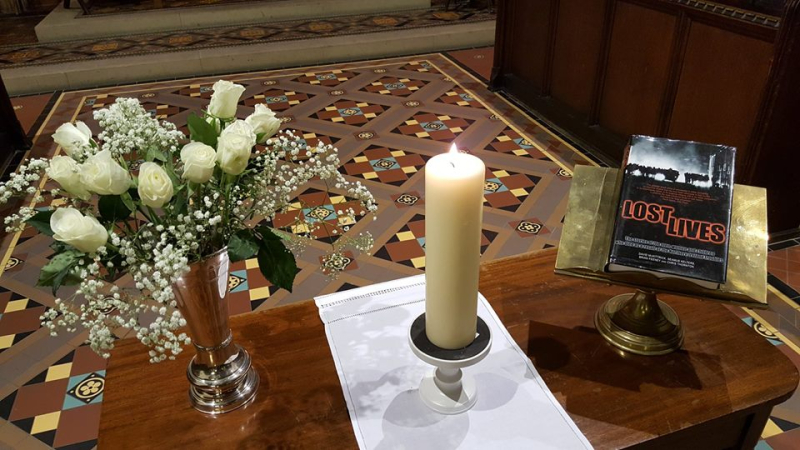 Last night, in All Souls Church in Belfast, I sat listening to the names of those who died as a result of our Troubles. Name after name. Every name was read. Indeed I read some of the names myself. The event lasted four hours. I was there for just over an hour.

It was poignant. In the silence of the beautiful Church building, with a scattering of people in solemn silence. Name after name. We know the statistics and figures but when you hear the names, one after another it is harrowing. Even the number with the same surname has impact in the sheer magnitude of the loss. Most names I did not know but I listened. I tried to hear the pain behind the name. The loved ones, still suffering.

A few names dropped depth charges. I surmised the ripples. First, during my time, I heard names I knew. Two fathers of friends.

The first was John Brian Martin. He was known as Brian and to his name “died 1983” was added as there were three John Martin’s killed in the Troubles. Brian’s wife Iris never got to tell her husband that she was pregnant with their son, John. John, is a dear friend, one of my former students, indeed one of my former interns. I have sat proudly as he has spoken about how his faith has helped not only dealing with never having known his father but how he has been able to be a peacemaker rather than someone seeking vengeance.

The other name was James McCallion. Jim’s son Stephen was in my class at Primary School. We loved football and Jim came to watch us, even managed a school team for Ahoghill Civic Week in 1972. I remember Jim on the touchline one night when I scored a cracking goal against Stephen’s team. I remember the smile he gave me.

Jim was literally in the wrong place at the wrong time in July 1976. Out for a drive with his wife, they stopped at the Ramble Inn between Ballymena and Antrim for a quick drink. Minutes later Jim was dead in a hail of bullets, probably from a loyalist paramilitary group who shot more Protestants than Catholics that evening. I think of Stephen and his family every time I drive past that pub.

Brian and Jim’s names were so close that when I heard their names I felt my heart break a little. I was also thrilled that they were being remembered.

Then there were names I knew, more from notoriety than fame. They dropped depth charges too but of a different surmise. There were the hunger strikers Francis Hughes and Raymond McCreesh and paramilitaries Dominic McGlinchy and John McMichael.

Some might wonder if these names should have been read at all. They caused the deaths of some of those that we were naming tonight. Should they have the dignity of being remembered in the same way?

The first thing to say is that the evening, organised by Rev Chris Hudson and Fr Martin Magill was never publicised as a remembering. This was an anti-violence event on the eve of International Day of Peace. The hope was that the reading of every name might have the effect of a Wilfred Owen poem, reminding us of the horror of conflict and urging us to never let it happen again.

Having said that, on the drive home, having just read John McMichael’s name, I did some serious reflecting. I started thinking of the McMichael and McGlinchy families. Whatever the choices their loved ones made, they too had hearts broken, tears to cry and grief to carry. The word “victim” is being kicked around like a political football, just now, but actually we are all victims of historical situations, injustices and bad decisions that had tragic consequences.

I found myself, in my surmising, asking about the dehumanising of those that we think might be “undeserved victims” because of what they did. I wondered what God was thinking when those tricky names were read out? How did the Creator see their humanity?

Suddenly I was at the cross. I was listening in to Jesus conversation with the thief being crucified with him. I wondered would the crowds see that thief much as we see the terrorist who killed "our" folk? He had it coming. Yet, the thief who died was a different person than the one that the world continued to judge. He found his God given humanity by an act of God’s grace.

What of McGlinchy and McMichael? Who knows the strange ways of God’s grace? I remember being staggered and embarrassed when I heard that Liam McCloskey, another hunger striker, had read the entire Bible during his fast.

As I continue to surmise so much of what came out of last night, I am thankful for the chance to stop and reflect. To be saddened and shocked at the numbers. Never again indeed, please God!

Since you own the stocki.ni.org domain, please create the email address stocki@stocki.ni.org and have the emails automatically forwarded to davidkari@gmx.de .
so I can activate the iphone.

Would you please let me know if it is possible.
My email address is davidkari@gmx.de

Thank you very much for your effort