JUSTIN ZORADI - MADE FOR THESE TIMES 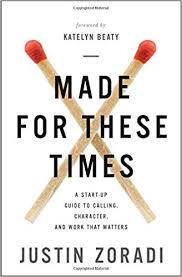 “I envision the work of the Lord as gigantic heavenly wheels rotating all over the earth. They roll around scrubbing up the darkness. mowing down injustice, and building up shaky structures of redemption and renewal. Put in motion centuries ago, the wheels are relentless vessels of creativity and disruption. The greatest opportunities of our lives are when you are invited to ride on the wheels for certain seasons. We may join with God for one or two rotations, and then shift off so others can hop on when our time is up.”

Wow. I love this. I love the poetry. I love the wide scope of history it encapsulates, the Kingdom of God eternally interrupting. I love the fact that it personalises, me or you, in the vastness. It gives me a glimpse of what I have already seen in my life, the privilege at times of feeling that I am riding on a bigger purpose that effects history. It also prises open what I long to do next, with the rest of my life.

It is a paragraph that I would have loved to have had at my disposal when I was attempting to fill my students with a prophetic vision of the promise of their vocations back when I was a Chaplain at Queens University Belfast. Amazingly it was one of those very students who wrote it.

There is a strange quirk in my memory. With pretty much everybody who would eventually become important companions on my journey, I can remember very vividly the first time we met. So with Justin Zoradi. I was standing at the top of steps in the Calvin College Fine Arts Centre. They were loading in for a Joseph Arthur concert. As he walked up the steps I had this weird feeling that he was walking right into my life. Who was he? I thought he might be a roadie but he was actually interning for my good friend Ken Hefner. We connected and I told him he needed to take another year out and be my intern in the Presbyterian Chaplaincy at Queens University, Belfast.

The next summer I was on sabbatical at Regent College, Vancouver sketching out a possible book based on the teaching I had given my students. It never came together. However, I did write a letter to get Justin Zoradi a VISA to come and work with us. Twelve years later and it is as if this was the book. It was not mine to write. It was one of those who’d follow behind me.

I remember another moment in Justin’s life, just as vividly. We were in Cape Town a few days ahead of two teams of students were leading. We were organising events for the trip and had a coffee with Ace, a friend who ran a soccer team in Guguletu that we wanted to play against. Ace had brought Anda and Michael, two of his players. I was well impressed at how Justin engaged with the boys.

As we left the Mugg and Bean Cafe Justin turned to me and asked, “Stocki, how are those guys going to get to college?” “I don’t think they are Justin. They’ll never afford it,” I answered. “well, I am going back to Portland to start something that’ll get them to college.”

Made For These Times tells us not only that Justin followed through but also how he did it and what else came of that moment. In the book Justin calls it a moment of obligation. A need opens up in front of you. You feel an injustice. You are brought before someone that you yearn to help. Your soul gets the wings of a hopeful vision of how you can transform something. In the book Justin sees that moment a few months later in Portland but I was there and I believe Cape Town was the moment.

Within a short time of leaving Belfast Justin started These Numbers Have Faces (TNHF) and Anda was the first student he took through college. The book acts as part memoir and part spiritual development. Later in the book we find TNHF doing amazing work in a refugee camp in Rwanda. In the process Justin is revealed as a social entrepreneur with a story but more than a story he has gathered the lessons needed to do such work. He has delved deep. Deep into himself and deep into what it takes to change the world. In doing so he pinpoints the answer to the deepest joy of us human beings - purpose!

For years I have taken hundreds of people to first South Africa (Justin was one of those) and more recently Uganda. I want everyone who went to read this book. Justin is vulnerably honest about his weaknesses and the struggles. He then very practically gives us a manual for any ordinary person to move on after those moments of obligation.

Reading it in the last week of sabbatical was utterly perfect. Justin who I hoped to inspire thirteen long years ago comes back to inspire me to keep on riding the “gigantic heavenly wheels.” He even corrects me and tells me where I have things to sort out. He concludes “You were made for this and now is your time.” I want some of that!