GRACE - OXYGEN OF ANOTHER WORLD BUT... 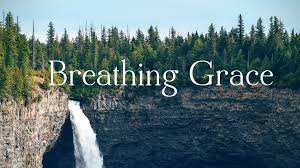 “Grace is the oxygen of another world and we like breathing our own.” I used this phrase as an illustration in a sermon a few years back. I think there is something in it. I thought it it was worth writing down and surmising a little further.

Jesus illustrated it well in his parable of the Prodigal Son. As the religious leaders of his day listened in, Jesus painted a vivid picture of a rascal who took his father’s inheritance and squandered it on sex and drugs and rock n roll, to give it a modern twist. Finding himself destitute he heads for home. As the story moves towards climax you can almost hear the Holywood soundtrack building the tension.

Jesus says that the father sees the rogue from afar and the religious leaders are getting all excited about what judgement is going to come down... and... the father wraps his arms around him, puts a ring on his finger and throws a party.

Jesus mentions the loyal, good living, brother as a comparison to the wild hedonist which makes even more acute the sense of the injustice.

Grace. It seems madness but it is our only hope. It is God’s way of love; loved as we are without merit. Did I say ridiculous?

The follower of Jesus is more than aware of the amazing grace that embraces the wretch and brings the wholeness of salvation. As Paul put it so well in Ephesians, “It is by grace you are saved through faith...” In Philippians he spoke of this in his own life, “not having a righteousness of my own that comes from the law, but that which is through faith in Christ—the righteousness that comes from God on the basis of faith.”

For Paul this was a whole different oxygen. From attempting by his own efforts at holiness to relying on God’s interruption of grace what Jesus achieved for him in his life, death and resurrection.

Down though the history of Christianity it has been a struggle for those who, like Paul, get this theological eureka moment. Falling into the arms of God’s grace like Jacob, Moses, David, Zaccheus and Paul before us we then go back to preferring the oxygen that we grew up on.

We start to set little legalist systems and then pummel ourselves under the guilt of failing to live up to them. No matter how much we believe in the doctrine of grace we look in the mirror in the morning and would rather be better looking, thinner, more successful and more holy. We never allow ourselves to be loved as we are, as grace informs us we are. Then as we go back to breathing that old oxygen we cut off the supply of the new oxygen that not only loves us as we are but has the transformative power to love us into who God can make us be.

Posted at 11:25 AM in BIBLICAL SURMISING - CARESS AND COLLIDE | Permalink | Comments (1)