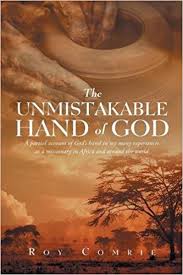 I am delighted that in the past year two friends have used my poems in their memoirs. Alain Emerson included no less than two of my poems in his stunning Luminous Dark. The other one that I feature in is a missionary autobiography, The Unmistakable Hand Of God by Roy Comrie.

Roy is actually a friend of my in-laws, Bryan and the late Anne Gordon. Bryan and Anne were Irish Directors of Africa Evangelical Fellowship of whom Roy was a missionary in various countries in southern Africa.

In 1995 I had an interesting juxtaposition of some of Roy’s missionary tales, that over twenty years later feature in The Unmistakable Hand of God, and PJ Harvey’s record of that year. I imagine the song Long Snake Moan might have caught my attention most.

Roy was bitten by a Black Mamba. Not many survive that. His Tarzan-like wisdom and speed of thought was one of the reasons he did. God’s grace the over riding one, he would add.

Roy, tells another story of picking up a hitchhiker in his VW Beetle, just after the Rhodesian war. The man was a freedom fighter and had an AK47 gun in his hand. After an aggressive start to the conversation by the freedom fighter Roy, unfazed by the confrontation, sneaked into the guys life, by speaking his language and drawing him in.

The man told Roy that hadn’t slept for months as a result of what he seen and done during the war. Realising that this was the most violent man he had ever met, Roy decided to take him to the most violent place there had ever been. Over decades Christians have been quick to denounce X rated movies, forgetting that the Christian faith is built around an X rated scene. Roy shared the story of Jesus’ cross.

When they arrived in Harare the man refused to get out of the car until Roy introduced him to Jesus. A week later they met at an arranged place. Roy says the man was running down the road towards him shouting, “Baba Comrie I am sleeping now!” Baba is the word for a dear friend. The man’s life had been turned around.

Listening to Long Snake Moan, my head tried to play with the snake and the soldier, seeking tough PJ Harvey guitar riff language. I wanted something menacing, maybe a little dark but ultimately redemptive. A Belfast band of the time, Disraeli Gears, featuring Paul Archer now in Burning Codes and Jonny Quinn, now with Snow Patrol, might have been in my head too. So I blended these two of Roy’s most heroic stories. There is now a book full of them.

I am thrilled that Roy included Black Mamba Sleeps in The Unmistakeable Hand Of God, in which he also mentions an interview I did with him in the Presbyterian Chaplaincy at Queens at Derryvolgie Hall. He did get my name wrong though calling me Steve Stockwell!

With a killer bite

On the very edge of hell

You take him away from here

To the lies and the spit

The slaps and clenching fists

To the whips and scourging lashes

To the thorns and angry twists

The hammer crash on flesh and bone

The shrieks of fury and pain

The breather into suffocation

Then the harrowing agony again

You stand and meet his stare

Sneak love into his silence

Treat him with precious respect

In an even more violent violence

None survive this merciless place

Yet you walk away somehow

Black mamba looks up at you and smiles