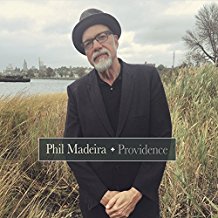 I have been a fan of Phil Madeira’s for over twenty years. And I don’t mean his songrwriting with the likes of the The Civil Wars that he won a Grammy with, or the two Mercyland records of hymns for everybody, or his production of tribute records to Paul McCartney and Mark Heard or his membership of Emmylou Harris’s The Red Dirt Boys. No, I mean Madeira’s very own work. Off Kilter was a beautifully crafted mood piece that had traces of Daniel Lanois.

There was a sixteen year gap in madeira solo records between 1999 and 2015 but the glut of his songs got finally released over three records PM, Motorcycle and Original Sinner. Indeed a song called Church that Phil recorded for a session on my radio show back in 1999 finally gets a release on Motorcycle.

Though all three of those recent albums are worth checking out Providence has had particular attention, even making Rolling Stone. It is rather a departure for Madeira. Everything until now has been very guitar orientated while Providence is piano driven. And I mean driven. These songs rattle along like a man on the Highway from Rhode Island to Nashville and back. Which is a perfect music backdrop to songs that go back to Madeira’s childhood and formative years before he headed to Nashville to follow his dream.

Lyrically this a beautifully autobiographical record. Barrington is about the area of Providence that Phil spent much of his childhood in, as does Rich Man’s Town. Crescent Park was a forbidden amusement park nearby. We even go further back to Gothenburg where his ancestors came from - immigrants and a political hit in the subtlety. The fact that Madeira is almost falling back in love with his home spaces rather than needing catharsis from some scars he escaped from make sit a joyous ride.

Phil Madeira as a jazz piano man. Who’d have thought? Is there anything this man cannot do musically. It’s Randy Newman meeting Mose Allison. It tasteful and in some ways that word tasteful  maybe best describes everything Madeira touches.

What a lovely review!