Home Archives Profile Subscribe
THE ALARM LIVE AT THE LIMELIGHT, BELFAST - 28.4.18
SHOULD I STAY OR SHOULD I GO? - THE CHALLENGE OF RECONCILIATION with Rev Dr Ken Newell and Fr Ciarán O'Callaghan 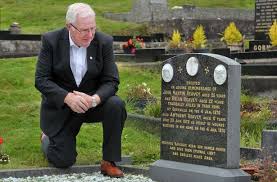 It was a very ordinary cup of coffee with, on the surface, a very ordinary man. We were in Fitzroy Welcome Area waiting to do interviews for a documentary about peace building. He was reading his paper and I sat down beside him and asked him to tell me his story. It was an ordinary kind of question but my asking it threw open the violent, bloody and scandalous sectarianism of the Northern Ireland Troubles.

Eugene Reavey's story should not get any worse than the first incident but tragically it does. On the 4th January 1976 Eugene came home to find three of his brothers shot at their home in Whitecross, County Armagh. Four members of the O’Dowd family were killed the same night in what seems to have been coordinated killings by the notorious loyalist Glenanne Gang. Two of Eugene’s brothers, John and Brian, in the early 20s, were dead and a third brother Anthony, who was just 17, died a month later in hospital.

That would seem to be enough trauma for one family to bare but there is more. The very next night eleven Protestants were shot in retaliation for the Reavey/O’Dowd killings at Kingsmills. Ten died. The Reavey family came upon the scene while visiting Anthony in hospital. Eugene Reavey was in the morgue getting the bodies of his brothers when the victims of Kingsmills and their families were arriving. He wept with them.

Yet, 23 years later, using Parliamentary privileges in the House of Commons, Rev Dr Ian Paisley accused Eugene Reavey of planning the Kingsmills massacre. The Reavey brothers were harassed from almost the day after Kingsmills but this was an outrageous public accusation, calling him “a wild man” of the IRA.

Sitting with Eugene in Fitzroy I could feel the anger rising in the depths of my being. I remembered that day when Paisley made the accusation. I never thought that I would ever be sitting having coffee with the man he was naming. How many of us realised that he was finger pointing at an innocent man? In all the verbal assaults that our different sides have thrown at each other over the last 50 years have there been any words more abhorrent than these.

The surviving Protestant from Kingsmills drove to the Reaveys' door to assure them that he knew they were innocent. The former chief constable of the RUC, Ronnie Flanagan said he had "absolutely no evidence whatsoever" to connect him with the massacre, and that no police file contained any such allegation. Yet, Paisley never apologised.

Not many of us have had such a multi faceted experience of The Troubles than Eugene. Yet, there is not one iota of bitterness in him. Indeed when he later, in the documentary, shares the story of his brothers’ murders he breaks down when he remembers his mother.

She was a spiritual woman to whom the neighbours came for prayer. One morning as she was praying Eugene asked who the candles she had lit in the house were for. She listed off neighbours with ailments and concerns and then said, “and that one is for the people who killed my sons.” She lit that candle every day for thirty seven years before she died.

Eugene also explained how on the night that the family returned from their aunts house to discover the bloody murder scene in their home that his father set the remaining brothers down and made them swear that they would not retaliate or join any republican paramilitary groups.

That two such upstanding, forgiving parents should suffer one of their surviving sons being accused of one of the worst atrocities of our Troubles… I cannot find words.

These days Eugene Reavey is campaigning for peace and healing sharing the Truth and Reconciliation Platform with the likes of Stephen Travers (shot in Miami Massacre), Alan McBride (lost his wife in Shankill Bomb) and Michael Gallagher (lost his son in Omagh bomb) to attempt to help bring healing and peace and rid us of violence.

Sitting with Eugene in our Welcome Area I was aware of his pain at both his brothers’ murders and being falsely accused of Kingsmills. I was inspired by his resilience and desire to contribute to a better future than the last that he had experienced the very worst parts of.