30 YEARS AGO... THE WORST 14 DAYS OF OUR TROUBLES... ONE MAN STARTED THE PEACE PROCESS 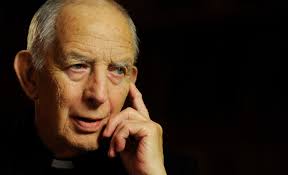 It is 30 years since one of Northern Ireland’s most tense and bloody fortnights. In March 1988 Belfast was on the very brink. Our ‘killing streets’ were even worse than usual. As it played out, one man quietly and humbly, followed Jesus into the middle of the violence, against all odds set in motion the end of the Troubles.

It all began on March 6th when the SAS killed three IRA volunteers, Sean Savage, Mairead Farrell and Danny McCann, who were planning to bomb a British Army event in Gibraltar.

There was already rage in Republican west Belfast when at their funerals on March 16th at Milton Cemetery, a loyalist gunman Michael Stone opened fire on the mourners with a gun and grenades. In the attack, caught on camera by TV news crews, John Murray, Thomas McErlean and Caoimhin MacBradaigh were murdered. Stone ran with the mourners in hot pursuit, the police intervening to save Stone’s life.

The bloody carnage was not done yet. On March 19th at the funeral of one of Stone’s victims, Caoimhin MacBradaigh, two British soldiers, Corporals Derek Wood and David Howes in plain clothes inexplicably found themselves caught up in the funeral cortege. Fearing that this was another attack like Michael Stone’s a few days earlier, the crowd dragged Wood and Howes from the car, attacked them and shot them dead. Again pictures of the brutality were caught by TV news cameras and beamed across the world.

These were perhaps the very darkest of days in the history of our Troubles. Yet, there was the very brightest light flickering in the blackest of nights. A clue to it was captured by photographer David Cairns. He clicked his camera at the moment when Redemptorist priest Fr Alec Reid was kneeling over the body of Cpl Howes, giving him the kiss of life and last rites.

In the one dimensional way that sectarianism fogs our perspectives, many Protestants saw Fr Alec Reid’s presence at such events as evidence that he was Republic leader Gerry Adams’ Confessor; the Catholic Church supporting the military campaign! History shows a very different scenario. That photograph was so much more than a do-gooder priest doing his duty.

Five years ago, Double Band Productions made a documentary called 14 Days, for the BBC. During the filming, in an interview with Fr Alec Reid he was speaking about his giving the last rites to the British soldiers when he added, “And I had the letter in my pocket”. “What letter?” he was asked. “The letter.”

The letter it was revealed was from Gerry Adams to SDLP leader John Hume and contained the conditions by which the IRA would begin talks that might end the military campaign. When Fr Alec got back to Clonard Monastery he realised that the corporals’ blood was on the envelope and he had change the envelope, before driving to hand over the letter that might be the moment that the peace process started.

Fr Alec Reid was not in cahoots with the IRA. He was a follower of Jesus who believed that the inhumanity going on around his Monastery in Clonard needed intervention. He believed that Jesus was a peacemaker and called him to peacemaking. If that called for mad actions that put him in danger, so be it.

On the 14 Days documentary, Gerry Adams spoke of Fr. Alec wanting to get between the baying crowd and the escaping Stone at the first funeral. Fr Alec himself spoke of trying to get between the British soldiers and those who shot them. In the seeming hopelessness of those 14 awful days in March 1988 someone had enough faith and courage to follow Jesus into the vortex of violence dragging us down.

I was at a major Christian forum a few years ago. There were over 60 Church leaders in the room, all Protestant. Asked to put significant events on a time line of The Troubles on the walls, not one mentioned Fr Alec Reid and his brave contribution. I noticed the gaping error. How can the Church not be aware, or be hailing, Fr Alec’s Christlike peacemaking effort? Is it that we do not even know? Or is it worse, that some would not recognise a Catholic as a Christian? Oh dear!

Whatever, in these 14 days, 30 years on, I am remembering Fr Alec, giving thanks for his belief that God could interrupt our Troubles and being inspired by his example to work for peace.

Thank you Steve for having brought to light again such an example of a true Christian.

Steve, thank you for the article. Just to point out that those unfamiliar with the events might assume from reading your article that the British Army corporals were killed by random people in the crowd that day. They were, of course, murdered by members of the Provisional IRA, after Father Reid had attempted to save them. The killings were later claimed by the IRA - see https://en.wikipedia.org/wiki/Corporals_killings for details. The corporals were victims as much as the others killed in these awful events. They also to have their deaths properly recorded.