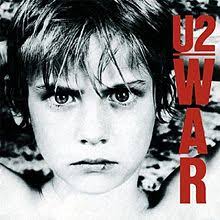 Thirty five years today I missed my morning lectures. Hebrew! You didn’t have to give me many excuses to miss a 9am Monday morning Hebrew lecture. This particular Monday I had a great excuse. U2’s new record War was released.

If I remember it was cold and wet. It might have been 9.30 before I got on my way. I walked the mile from my College Room into Belfast to the first record shop. There were so many in 1983. To my utter disappointment it wasn’t there. Nor in the next shop. Or the next. I trailed all the way across the city centre.

The last shop was Caroline Records briefly located in Lower Garfield Street. I walked in and started flicking through records. As I did the door opened and a box landed on the counter. I kept me eyes on it, eager with anticipation. The staff opened the box and there it was. Before they had it out of the box I was on top of them. I’ll have that please. Without doubt I was the first person in Belfast to own War.

I had been a fan for about eighteen months, since I risked a record token birthday gift on October and fell madly in love with Gloria, Tomorrow and With A Shout (Jerusalem), exuberant songs of spiritual energy that fired my recently converted spiritual imagination. I had been to see the band at the Maysfield Leisure Centre in December 1982 where Bono’s charismatic performance had blown my rock fan mind.

New Year’s Day had been out for over a month. It was the first single off the album, following the stand alone single Celebration. It had continued that spiritual kick. “Under a blood red sky” and “a world in white is under way” were apocalyptic and eschatological. I need that album. I failed my Hebrew that year and though that one Monday wasn’t to blame, I was well prepared for a resit to get a dose of U2. Of course we had heard the song about Belfast, Sunday Bloody Sunday at the Maysfield concert but to hear it on record was amazing. That is about my city, our Troubles and “to claim the victory Jesus won” was my faith being applied to peace making.

Then there was Drowning Man that quoted Isaiah 40 and the whole thing finished with Psalm 40. I was not convinced about Red Light with Kid Creole and the Coconuts but Like A Song… and Surrender were immediate favourites.

Thirty five years on and three of the songs, New Years Day, Sunday Bloody Sunday and 40 are still featuring in the live sets. Oh for Like A Song… to get a rare run out sometime! Some of it has perhaps not aged so well. A new arrangement of Two Hearts Beat As One might be interesting.

For me, War will always have that special place. My mate Peter is on the cover! It was the first U2 record I got on the day of release. The first one that I had first.