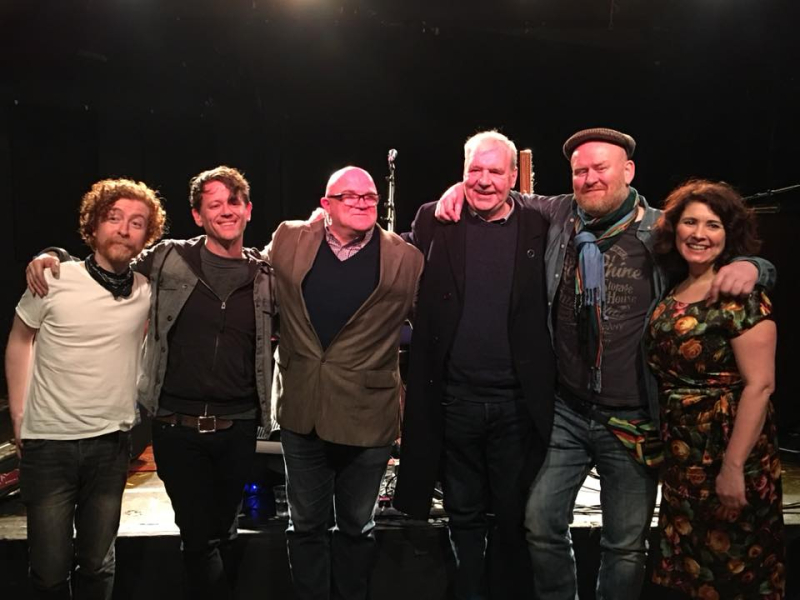 It was a very special night. I don’t mean subjectively, just because what I had wanted for a few festivals finally came about and I had on the stage four great songwriters with the wonderful Stuart Bailie. No, it was more than that. There was something in the room. The power that I believe song has, giving us an evening of insight, lament, catharsis, imagining and hope.

The respect and trust that Stuart Bailie has with Belfast songwriters and his conversational style had tonight’s singers sharing in a warm and casual style. Tony Wright waxed lyrical about County Derry and working with Iain Archer who talked about a bomb going off as he set up to play with Brian Houston outside Dr Robert’s Record Store.

The songs, four each, two in each half, were personal, rooted in the space of our city or country. They were honest, vulnerable and always hopeful.

Tony Wright formerly of And So I Watch You From Afar and now VerseChorusVerse is all about hopefulness. Tony has this infectiously positive disposition that came through in the line “Live your life in awe and wonder/the only comeback is joy” from No One As Lonely. Hope as a “she” took on the darkness in We Spoke With The Night and Sudden Song had us all wanting to move to Country Derry - a Springsteen-esque praise for place song.

Ursula Burns, “The Dangerous Harpest” as her most recent record id called, is part Kate Bush, part comedy which she beings out even more at the Edinburgh Festival. What she really is, above all, is an artist. The thought processes into tonight’s songs were so imaginatively crafted. Heartbreak Was Heartbreak reminded us that heartbreak was real on both sides of our conflict, her new song that took twenty years to write, Summer Dress, had her trying to make pretty our ugly violent city. Being Born had us laughing out loud with the humour of her row with God that she should have been born on the Falls Road but Honolulu! “I am going to be twenty five before I find out I don’t have to be plastered!” This is social comment of the highest thought and quality.

Joby Fox played in one of my favourite bands Energy Orchard but is now as human rights activist who has been raising funds for and working himself for refugees in Lesbos. Tonight he blew us away with the wow moments. The first Energy Orchard single, Belfast, that he wrote got a re-arrangement and new verse for post conflict days. A boy from West Belfast then sang Maybe I Am, Maybe I’m Not for the kids of East Belfast. Republicans and Loyalists, quite a title, then took us into the forgiveness that Gordon Wilson sent out after the death of his daughter Marie in the Enniskillen bomb and, in some way, for all of us. Joby had an EP awhile back that was dedicated to John and Yoko. Tonight I saw him as our very John Lennon but, forgive me Yoko, with more authenticity! It was powerful stuff.

And there is still Iain Archer. Not as well known as the Morrison or Lightbody or most of those lauded in the rock star filled museum cabinets around the Oh Yeah Centre, where this gig was, he has had a Grammy nomination for James Bay’s Hold Back The River as well as strong songs on number 1 albums by Jake Bugg, Liam Gallagher and Example! He’s one of our very best ones!

Tonight Iain drew us into lament in the sublime Holywood Seapark, about losing his Grandfather, that touched on all our Belfast loss. Everest took a hopeless situation and like a Psalmist sang “Some other day when my morning comes/I’ll be the one that waited all night,” with a Northern Irish resilience. When It Kicks In was a frustration with the slow process of our peace but hopeful that the day will come. The day that comes will have us all singing and living the chorus of his final tune, a new one, “See the good in everyone/and let go of the bad”. Oh my!

Throw all of those songs and the conversation with Stuart in between, set in the historic Oh Yeah Centre during a 4 Corners Festival and there was a unique energy in the room. The past was held up, we looked into the darkness but somehow shone a light on it. We celebrated the transformation of the past twenty years but the power of song fuelled a celebration of our place and inspired the desire to move on… “to see the good in everyone.”

Thank God for our songwriters and these songs of cathartic redemption. More of this kind of thing!