Home Archives Profile Subscribe
RICHIE FURAY - I'VE GOT A REASON, DANCE A LITTLE LIGHT, I STILL HAVE DREAMS
CHURCHES? PART OF PROBLEM OR SOLUTION - BLESSED ARE THE PEACEMAKERS: 4CF18

STEVE STOCKMAN IN CONVERSATION WITH ANDY ROWEN: U2 CONFERENCE BELFAST 2018 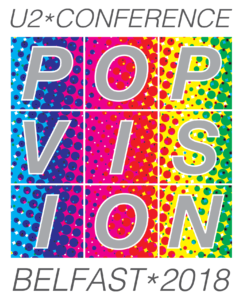 It is exciting to have the U2 Conference in Belfast this summer (June 13-15). I am delighted that we in Fitzroy will be hosting some of the event. I am thrilled to actually be taking part in the Conference.

This is the 3rd U2 Conference. The previous two in 2009 and 2013 have produced two books Exploring U2: Is This Rock 'N Roll and U2 Above, Across and Beyond: Interdisciplinary Assessments. The Conference aims to appeal to academic and general audiences and this year’s theme is based around the Pop album and Pop Mart Tour.

Coming to Belfast is all about coinciding with 20 years of Northern Ireland’s Good Friday Agreement which brought political peace to the country. U2 were very much a part of that historical moment when they appeared along with Ash and political leaders John Hume and David Trimble at a Pro Agreement Rally in Belfast’s Waterfront Hall.

I will be speaking about the power of the song, particularly in the work of U2, towards peacemaking.

Even more exciting, I will be in conversation with Andy Rowen. Andy is the subject of two U2 songs Bad and Raised By Wolves. In a communal way Cedarwood Road is about him too as it is about his home and family where Bono found refuge and salvation after his mother passed away.

Raised By Wolves is about the UVF bombs in Dublin on May 17, 1974. Andy was 11 and he and his father got caught up in the bomb. As Andy told me there was no post trauma counselling in 1974 so he was back in school on the Monday as if nothing had happened. Sadly for Andy his way through that trauma was alcohol and drugs and Bad is about that.

Indeed the original lyrics of Bad, turning up in a U2 Exhibition at the Rock N Roll Hall Of Fame in Cleveland was one of the ways that God threw his arms around Andy Rowen and brought him back form the brink of addiction.

Andy’s story is inspirational and what I love most about his story is that Andy’s parents took a young teenager into their home when he needed salvation and thirty five years later a lyric written by that young man became the means of their own son’s salvation.

It should be a movie! Someday it might be. Come along and hear it from Andy Rowen himself at U2 Conference 2018!

Can you please share what you remember what the original lyrics stated that helped Andy Roman so much please?