RICHIE FURAY - I'VE GOT A REASON, DANCE A LITTLE LIGHT, I STILL HAVE DREAMS 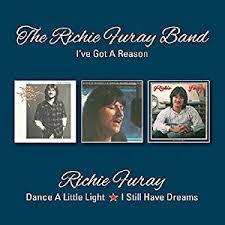 Here’s a lovely re-issue that I have been waiting on for over twenty years!

Around 1980 I was a member of the Word Record Club. It was a Christian record club and I was drawn to the Richie Furay record I’ve Got A Reason. I was a Neil Young fan by then but not very aware Buffalo Springfield or Furay’s place rock history.

I got fascinated by Furay, a rock star who became a Church pastor. It took a few years but I eventually started investigating Furay’s career. I got my hands on the two Souther Hillman Furay Band records that he did with songwriter JD Souther and one of the founders of the Byrds, Chris Hillman. Then there was Poco, the band Furay formed after Buffalo Springfield. Then there was Buffalo Springfield itself!

Over the last twenty years Furay has come out of his Church pulpit to make a few records. There have been a few that have been very upfront in their Christian content.  Then there are The Heartbeat Of Love and 2015’s Hand In Hand, Best of all 2007’s live record Alive blended his entire career in one stunning concert.

Of everything Richie Furay has done however, there is a trilogy of records that he recorded for David Geffen’s Asylum label in the late 70s - I’ve Got A Reason, Dance A Little Light and I Still Have Dreams - that I think are the best three records he was ever involved in.

Furay promised David Geffen that he would not preach in his music. He doesn’t. Yet, at least on the first tow of these records there is a underlay of faith. The songs are strong and the arrangements creative. The songs are as good as Furay ever wrote.

Being Richie Furay these records are littered with big names, Al Perkins, Waddy Wachtel and two Eagles, who were formerly Poco, Randy Meisner and Timothy B Schmit. David Cassidy even does backing vocals!

Over the years I picked up the vinyl versions and was always astounded that an artist of Furay’s status had not had these records re-issued. Finally… I was a happy boy on Christmas Day when Santa delivered the Remastered two CD set that has all three of the Asylum records on.

My 2008 Interview with Richie Furay