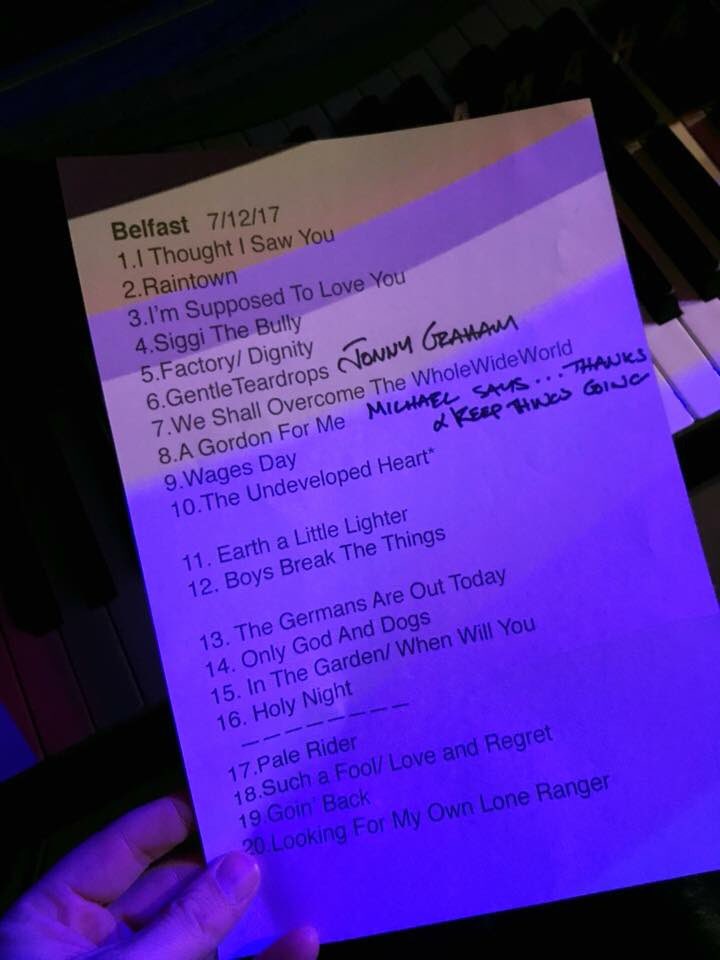 In the Short Stories Notebook that he was selling after the gig, Ricky Ross tells us about him and his wife being at a play in New York that was simply the story of a man’s life. Ross writes, “It struck me then that someone telling their story front of an audience might still be the most potent kind of night we could experience.”

Tonight Ross created exactly that. When Ricky Ross goes solo, it is not a stripped back economical way to tour Deacon Blue songs. Not that he doesn’t do Deacon Blue songs. It is just that this is a different kind of art… and art it is.

The Empire is no easy venue. A bar running down the side of it has been the bane of many a good concert. Ross himself did a gig here a few years ago where the audience had come to party to Real Gone Kid, getting more and more frustrated as the concert progressed. The drinking without an outlet to party made it a tricky night.

Not tonight. Tonight there was rapt attention from the first chord striking the piano on I Thought I Saw You. The bar shut and the noise hushed. Ross said that we would hear songs of love and marriage and children and divorce and all of life. He pretty much covered every area. In a sense with the storytelling conversation in between this is like a theatre performance. It’s not a bunch of songs to fill a couple of hours. Each one is chosen carefully and every one matters to someone in the crowd, somewhere on their journey.

That way of reaching an audience in personal ways is highlighted when Ricky send out a song to Jonny whose mate Michael wants to say ‘thanks and keep thugs going’. Ricky songs Gentle Teardrops for Jonny and then goes into a song he wrote for one of his daughters We Shall Overcome The Whole Wide World. It’s like a pill of resilience, straight to the soul.

There’s a smattering of well known and some rare Deacon Blue and Ricky Ross songs. I imagine that even fans were off home to remind themselves where Earth A Little Lighter and Looking For My Own Lone Ranger were from.

Introducing Undeveloped Heart Ricky told us about never quite getting it right, which explains the different versions he has released. He also talked about adding a Beatles segment to the recorded version but his manager had warned him off, fearing a law suit. “I blame Yoko,” he joked. Tonight we got I’ll Get You, b-side of She Loves You, right there in the middle.

The big cover tonight is Springsteen. Even then it is not a hit but Factory from Darkness On The Edge Of Town. Dedicated to the Belfast Shipyards it is a reminder of the commitment and toil of the working man. Cue Dignity, but not a Deacon Blue encore Dignity. Tonight it is how it would have sounded had Springsteen wrote it from Nebraska. “Home… work… faith…” felt more important than ever. This reinvention suggests Short Stories Vol 2 will have many reasons to come into existence.

The highlight for me tonight was again Only God and Dogs. I first heard this the last time he played The Empire and it came out on Short Stories Vol. 1. It is a perfect song, throwing out the life of a dog who chooses a homeless guy instead of a big house in the suburbs. When Ricky sang:

I'd give you everything of me

Knowing you can't return it back in full

That's why I love you

The way only God and Dogs can do

… the hairs on the back of my soul stood up. Preceded by The Germans Are Out Today and followed by In The Garden, an old hymn, as covered by Johnny Cash on his My Mothers Hymn Book album, this was the homily section of the evening.

Not that everything tonight didn’t have a spiritual hue. Ricky Ross doesn’t write a song that doesn’t have a contribution to make. Even Boys, Boys, Boys about his son’s ability to break things has conversations going on among mothers after the gig.

In the end it happens. What Ricky told us he would do with songs about family and life in all its seasons is what the chat is about among friends as they leave. That is what this art of the concert should do.

I am thrilled to say that Ricky Ross will be back in Belfast on February 7th as part of the 4 Corners Festival in Fitzroy... more details to follow