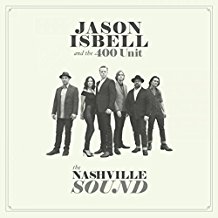 When Southeastern crossed my radar in 2013 I thought I had at last heard the follow up to Ryan Adams’ finest moment, Strangers Almanac with Whiskeytown. Southeastern had that same immediacy and familiarity as Strangers Almanac with at the same time all the fresh sense of originality. Isabel’s follow up Something More Than Free was equally engaging.

Where his mate Ryan Adams’ output has been a little erratic, it seems impossible for Isbell to be anything other than consistently brilliant. So, yet again with The Nashville Sound Isbell has made a mother stunning collection of songs.

The record rocks harder than the previous two with Cumberland Gapand Anxiety turning Isbell’s volume levels way up. There’s a groove to White Man’s World that echoes one of last year’s songs of the year Black Man In A White World by Michael Kiwanuka.

Louder or rockier or whatever Isbell’s definition of The Nashville Sound is, the lyrics still have those deft touches of lyrical wonder. This record is filled with white man observation on marriage, fatherhood and Trump’s America!

The influence of Amanda Shires in Isbell’s life is omnipresent. On the record her fiddle playing is like a pipe bomb, to use an old Isbell image. She explodes into songs bringing energy and vitality.

Of course she is so much more. As well as embellishing the tunes Shires is between and on the lines of the songs themselves. Shires is the companion who rescued Isbell from his addictions and mothered his brand new daughter.  In If We Were Vampires, where he throws out line upon line of adoration towards her, I particularly love the lines:

“The fragile heart you protected for so long

Or the mercy in your sense of right and wrong"

The daughter they have had together is a reason for Isbell to believe in God in a world where that is getting harder and harder. In White Man’s World:

I think the man upstairs must'a took a vacation

I still have faith, but I don't know why

Maybe it's the fire in my little girls eyes."

Do not think for a moment that this record is all about some comfortable domesticity. Isbell’s new contented family life is a place of strength from which he surveys and critiques the world. Trump’s new America is a reality but hope and purpose ends the record. In Hope The High Road:

"Last year was a son of a bitch

For nearly everyone we know

But I ain't fighting with you down in a ditch

I'll meet you up here on the road"

Finally Isbell’s altar call sermonic conclusion would be one that this preacher could do worse than return to time and time again. Whatever the world throws, however much we struggle in personal or national life, Isbell has a prayer and spiritual pure gold nugget:

“I hope you find something to love

Something to do when you feel like giving up

A song to sing or a tale to tell

Something to love, it'll serve you well.”

There can be debate as to whether this is the best of Isbell’s recent trilogy. What The Nashville Sound has, that the 400 Units have added, is variety of sounds. I would suggest that when you add it to Southeastern and Something More Than Free that it is safe to say that no one has made three records in a row that are as consistently good as these three, for a very long time.