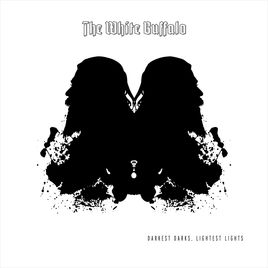 When I heard White Buffalo on Later… With Jools Holland I thought great voice, rocking band, but it seems a little on dimensional. Was I ever more wrong?!

White Buffalo is the moniker for songwriter Jake Smith. When your songs are as bawling and brawling as some of Smith’s using your own name like the introspective Jackson Browne or James Taylor doesn’t  seem right.

The first thing to hit you with Smith is his voice. It is a baritone that sounds aged, with a deep rasp like an Old Testament prophet must have boomed. Imagine Jeremiah fronting a southern states bar band reaching almost post punk on some songs here.

But what I have learned by falling on love with Darkest Darks, Lightest Lights is that Smith has way more than one dimension. White Buffalo songs shift in the few seconds between tracks from being as rowdy as a Saturday night brawl to the sensitive spiritual searching of a Sunday morning homily.

On Robbery we have “Guns blazing hell and steel” and a vulgar word, then on The Observatory we have a tender look into the soul of humanity, "Everybody cries, everybody dreams, everybody wants, everybody needs love – and I am one,"

Nightstalker Blues Explicit puts the foot down on a freight train and I Am The Moon is fragile midnight lullaby, on the rocking chair by the hearth. The Heart and Soul Of Saturday Night is a cousin of Elton John’s Saturday Night’s Alright For Fighting in its hedonistic anarchy whereas If I Lost My Eyes is fragile yearning for love. I guess the contrasts are in the title of the record!

The other thing I thought watching them on Later… With Jools Holland was Steve Earle. That rugged organic Americana country rock sound. It would be easy to see Smith as next generation Earle. Part of me sees that as a fair assessment, a compliment to both. Another part of me thinks that White Buffalo might be a cut above, more variety on the palette, more genius in the artist. In the meantime Darkest Darks, Lights Lights is mouth watering anticipation of a great career.