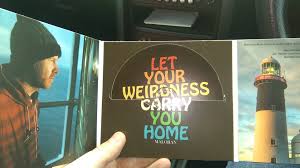 When I listen to Malojian I cannot help thinking of Glasgow’s Blue Nile. Not that they sound like Blue Nile but that feeling of utterly loveliness, a sound that is like lying back in a big soft rug by the fire. Not that that means that this is easy listening. Oh no, Malojian shift gears and rhythms and conjure surprises in sound. You can hear the influence of middle period Beatles in some of their inventive effects. Not that they sound very like The Beatles either.

Malojian sound very much like themselves. Having recorded last year’s wonderful This Is Nowhere in the real rock n roll space of the Chicago studio owned by legendary producer Steve Albini of Pixies and Nirvana fame, they now found the least likely rock n roll place to record; the Lighthouse on Rathlin Island! Is that the puffins I hear at the end of Broken Light Company (Theme).

The emotional centre of Weirdness comes at the end. The penultimate track, Purity of Your Smile, with its sparse acoustic picking beginning and gentle strings that swell (strings are a success throughout). About songwriter Stevie Scullion’s young children, it is beautiful without being too mushy sentimental:

“You've got your mothers ways

That’s the way i hope it stays

Gentle innocent and full of grace”

The closing title track continues with a message to his kids about their weirdness:

“Your beauty comes from deep inside your bones

Let your weirdness carry you home”

Weirdness and children come together in A New Armageddon. Perhaps it is his new borns that make Scullion think of his own childhood and how life was simpler then:

“When we sat at the end of our street

‘neath the amp with the world at our feet

I knew where I belonged

I knew where I belonged”

He then plays on the apocalyptic Scriptural word Armageddon but sings it with word play on his home county… “ARMAGH…GEDON!”

Another particular favourite of mine is Beard Song where the hipsters are the butt of the weirdness and humorous social comment:

“Just because you brow a beard

Anyone can do it”

Malojian are a local treasure. That they are ours and not from somewhere in Illinois or Minnesota. Goodness I am thrilled. They are currently ploughing a fertile, prolific imaginative furrow… or in “Armaghgedon” you might say the orchard has never been so ripe with the fruit of musical invention!