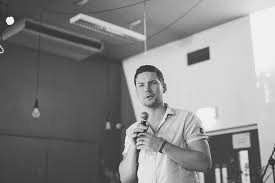 This week saw the publication of my friend Alain Emerson's book Luminous Dark. It is the story of a young man who loses his wife to cancer when she is just 23 years old. It is the story of a grappling with grief, a wrestling with God and personal journey through the rough terrain of the valley of the shadow of death. It is Alain's story. I asked Alain a few questions about how a story he never wanted became a story that he wrote down for all of us to read and learn from.

I remember at the time that Lindsay passed away that you told me that this was never supposed to be your story. When did you come to to terms with the fact that it was your story?

I distinctly remember the moment, one week after Lindsay died. My mum and brother-in-law Stuart had helped me clear out the one bedroom apartment Lindsay and I lived in. We went back to my Mum and Dads house where I was going to stay until I got myself sorted.

My ‘new’ room was my sisters old room - pink and purple colours surrounded me - and the boxes containing the content of Lindsay’s and my home sat around my feet. I distinctly remember saying to God, ‘This is my story now and I don’t want this to be; How have i found myself in this place with this story. It’s not what I signed up for.’

Coming to terms with the fact that it was my story was a long process. Reality is cruel in such days. The brutality and finality of death simply force you to come to terms with it. It makes you come to terms with it. Because when you still love someone so much and the object of that love has been removed, all traces of their body taken from you, you become completely grounded in the distinct reality of the moment. That doesn’t mean you have processed it, that long, arduous journey is only beginning, but you comes to terms with it because the sense absence is all-encompassing.

When did you get to the point where you thought that you needed to write your story?

During the months of Lindsay’s operations and treatments and sickness I was keeping friends and family up to date with her progress through my blog.  People were faithfully praying and walking as best they could through the journey with us.

When Lindsay died, I suppose I felt a degree of connection with people, even virtually.  They had left loving and compassionate comments, gathering to pray together etc. throughout her sickness and I guess there was apart of me that was aware that after she died these same people where now praying and directing their loving thoughts towards me.

So I began to share some of my thoughts with them.  I also found a degree of catharsis in the process. My observation was that as I posted something, (maybe once a week), during the weeks of my grieving and I tried to be as honest and true to what I was experiencing as possible, it seemed to resonated deeply with lots of people.

The comments on the blog, moved to privates messages and emails, and then to people calling to see me.  I became aware of a whole section of people, who have never been given permission to grieve properly and fully; people who simply wanted someone else to ‘get them’; someone else who could give a language to describe the turmoil of their soul.

Many of these people where ‘stuck in a moment, and they can’t get out of it.’ Initially I wanted them to know that was ok and then as I began to fully embrace the pain, I found that this gave way to the first shimmers of hope.  I didn’t want them to stay in that place of darkness forever as much as I can understand not wanting to ‘move on.’  I wanted them to move with me towards hope.

It was the experience of how the vulnerability of my own story was resonating so deeply with others, that I realised I would someday love to collate my blogs, journals, and reflections into a book that could be some kind of resource and connection for those walking through the Valley of the Shadow.

You were writing this part of your story at a very different time in your story. How was it living in that sadness with all the happiness of your family around you?

It was interesting process! First and foremost though I wrote the book because Rachel encouraged me to.  She felt I had something to say for people moving through such a dark season of life and she wanted me to do this.

In fact on our sabbatical 5 years ago in Vancouver where we had lots of time as a family, is when I started the book. I would get up early in the morning take myself down to Starbucks and spend 2-3 hours writing.

Rachel would sort our two children out in the mornings, releasing me to write and then we would spend the rest of the day together. I couldn’t have written this without her. I think writing from a pretty ‘healed and whole’ place was really helpful.

While much of the book draws together the raw extracts from my journal and blog in those intensely painful early days of grief, piecing it all together in the structure of a book, could have only been achieved maturely and appropriately with the wisdom that comes from walking into wholeness.

Practically too, having the girls around me as I wrote the book, give me a beautiful reminder, that though I was trying to enter into the moments of grief again to add weight and feeling to my writing, the reality was this was not my reality anymore. A new chapter of my life had opened up - I had a soul-mate in Rachel and was a dad to two beautiful girls Annie and Erin - and I was fully living that chapter out as I had the previous chapter of my life.  That new perspective a great space to write from.

What did you learn most from writing the story down?

I learned that I process a lot! Seriously, I think writing the book confirmed the insights I was discovering as I was walking through the darkest days.  In those days it was like I instinctively knew any chance I had for healing was only going to come by being ‘true’ to the pain I was experiencing. Further, that God wanted me to, no matter what they meant I had to say to him. It was so disconcerting at the time but I knew I had to do it.

So writing the book and searching the scriptures taught me that, you can this kind of stuff scattered all through the Bible. It is the story of God, interacting with ordinary human beings like me in the most earthy and real ways.

The Bible is full of trials and tragedies in a broken world and it takes raw, gutsy and honest faith often to believe we will see ‘the goodness of God in the land of the living.’ Writing the book taught me that as important as it is for us to have a theology of victory, which I whole-heartedly say ‘Amen’ to, we also need a theology of suffering and in the church today we haven’t always been brilliant at articulating that.

Actually to be a follower of Jesus, to experience His life to the full, involves what Paul described as knowing Him not just 'in the power of His resurrection and in the fellowship of His sufferings.’  I learned, even though it is totally counter-intuitive, that it is an awesome privilege to be allowed to share with God in His sufferings and the pain of His heart for this broken world he loves.

I think when we share in his sufferings, he is allowing us to feel what he feels about the world. He is trusting us with part of His heart and there is something for us to steward well with what he has entrusted us with.

Writing the book, reminded me that through this experience, I got to love a girl who was going to die when she was 23. I got to experience a deep oneness with her that I never knew one could experience. And through her death and my encounter with God in the dark night of my grieving I have been transformed. If I’d been given the chance beforehand I wouldn’t have chosen this way, but living through it I would never give it back.  I wouldn’t be the same perfectly loved, whole son of God that I am now, and I don’t think I would be as compassionate and anywhere close to being like Jesus as I am now!! Still a long way to go on that though!

What would you like people to get from reading your story?

I would love people first of all to feel permission to grieve where they feel they have not had that.  I would love people to find some kind of language that validates their pain and even ever so slightly feel a little bit more ‘got’ in the midst of the agony of soul.

I would also love people to see how honest prayer can be.  What you may perceive as ‘bad’ prayers are better than no prayers. Pour it all out before the face of the Father, no matter what way the words (or groans) tumble out of your mouth and soul.

I would love people to know that there is HOPE, not in some fairy tale kind of way.  Not even because the circumstances of life can turn around for the better, although they can and that is often a sign of God’s promise of our lives.  But more because HOPE is a person - Jesus.

So even through the darkest of nights, we find him there.  And though we may not be ready for hope at that point, the one we find weeping with us - silent in our pain but certainly not absent - that One is HOPE. My deepest prayer is that people would realise from the book that whatever our circumstances in life, we can get Him. We can get Jesus and He is more than enough.