STORY OF STOCKMAN THE RELUCTANT POET 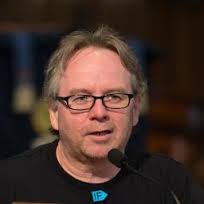 Next week (Oct 26 & 27, 2017) I will again be performing my poetry, this time at The Scottish Baptist Assembly (info here - http://www.baptistassemblyinscotland.org) I thought I would reblog this piece  about my reluctant poetry career!

I started dabbling in poetry at maybe 12 or 13. There had been a guy in Primary School who wrote and I guess the creative aspect of it appealed to me. I couldn’t sing or paint. Maybe I could rhyme words. I found out that I could. The rhymes were relatively easy but the other words and non rhyming lines in between were a little harder. If truth be told I have probably got away with the rhyming, hiding the average lines in between, for nearly 40 years. At least from those who don’t know!

I discovered faith at 17. I started to follow Jesus. That gave me something else that had been missing. Something to say. At the same time I discovered Bob Dylan and though I never dared reach to be anything like him, those rhymes improved and even some decent lines in between started to appear.

So, I used poetry as my spiritual diary. I used it in my preaching, which in my early twenties was concentrated on youth missions where a wee rhyming introduction might grab the attention and set the theme. I also used it to unpack the falling in and out of love that I was doing a little too regularly at the time.

Then in 1990 I was going off on an Inter-Church Youth Trip to China. We needed to fund raise and I threw out, as a laugh, the idea of a poetry book. Someone picked up on the idea and before I knew it I was edited down 10 years of rhymes for a book. Being a charitable project and the fact that I was the youth speaker of the day it sold well and covered the trip.

It also made some fans! People would share how they had used it in Church or Youth Group or School. I guess that encouraged me. Though I mostly used the rhyme to untangle my own heart and head and soul, I did start writing for particular events.

So, for the next ten years I printed up my own books at various times or used them for fundraisers for other Mission trips.

I always thought that my work was more lyrics than poems, that they were more for songs than for the printed page. That’s why we called the very first book, Lyrics To Unwritten Tunes. A few people did try their hand at using them. Bryan Gormley did a a few and I Drove Back Into Belfast worked particularly well. Peter Morrow did some too. Horsy Morgan were the first guys to release anything on an album; Two Twigs Entwined worked particularly nicely. Brian Houston kindly used a poem on the sleeve notes of his debut record Crush.

Beginning to use music with the rhymes developed when ECONI, a Northern Irish reconciliation organisation, asked me to do a soundtrack for a short video, just after the IRA ceasefire in 1994. I worked with Iain Archer, his wife Miriam and Jonny Quinn (now Snow Patrol) on a poem, song, guitar piece called The News Was News Today. Iain’s guitar and Miriam and Iain’s harmonies lit up this piece.

Iain and I worked on a few other collaborations and I also worked with Gareth Black, then guitar hero with local band Halcyon Days.

Sam Hill had been trying to use my lyrics for about 10 years when we decided to do a gig together in 2000. This was for the launch of my book Dare and instead of Sam doing a song and me a poem we tried to blend the two. This technique really worked and instead of poems with a swathe of music as mood, we used the song structure for a blend of my spoken word and Sam’s singing.

We were as surprised as anyone at how successful this sounded and Phil Baggaley picked up on what were doing and, before we knew it, we were in Gold Records studios in Derby recording Grace Notes. As an album I think it works but the industry didn’t seem to know what to do with it. We brought it out under the name Stevenson and Samuel and it was a thrill to play Greenbelt a couple of times and tour a little around England and Ireland. We even did Guernsey. We also got to work with Dave Clifton and Mark Edwards in the studio, and live we played with the awesome bass playing genius Steve Lawson and the wonderful fiddle player Helen Killick. Dave McNair did a gig or two on piano. Julie Lee even sang.

Had Sam and I lived closer I am sure we would have done more but distance and life got in the way. Grace Notes also came out the same year that I wrote Walk On;The Spiritual Journey of U2 and I remember thinking that the poetry was about to take second place to the prose. That has been proven to be true and I have written so much less in rhyme over the past 15 years.

I did do a couple of projects with Gordon Ashbridge, the photographer, and we brought out a couple of books but daily blogging has taken up the majority of my words. Last year I dragged all I had written over almost ten years together and self published two books; one of rhyming lyrics and the other liturgical poems, reflections and prayers.

In the last year I have enjoyed co-writing again. Jonny Fitch is a twenty year old songwriter who goes to Fitzroy and we have been doing the Bernie Taupin/Elton John thing. Some of it has worked very well particularly songs about our shared Ugandan trips.

So after years and years of not doing poetry I am invited to do two gigs in a week; actually three. As I have been chasing set lists today I have come to realise that over thirty years I probably have a decent enough wee book in the middle of all the other stuff. If there is a publisher out there…

If you are interested in investigating… or writing a song… then find most of my stuff on this blog page.