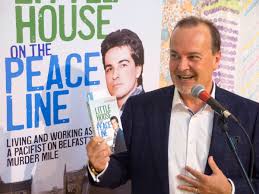 If you don’t know about Tony Macauley’s first three memoirs then start with Paperboy. That hilarious description of being a boy on Belfast’s Shankill Road in the 70s was followed by the equally laugh out loud Breadboy and then his University days in All Growed Up. All three are witty gems strewn through with the astute social, cultural and political of growing up in a divided community.

Little House On The Peace Line is the phase of his life where I best knew the name Tony Macauley. Yes, he was known in his Christian Union days at University of Ulster Coleraine but when he took a job at 174 in the New Lodge his reputation soared. 174 was a brand new cutting edge Christian Outreach and Tony was the Christian talk of the town!

In Little House On The Peace Line Macauley is beyond All Growed Up and is a mature work of a young, almost naive, man taking on almost more than he can chew.

This memoir is darker than the other three. It still makes you laugh out loud but not as often. For a young Protestant to work in a Youth Club in the Catholic New Lodge is a courageous thing. At that time, pioneering. That during this first job Tony should get married and buy a house in this part of the city would be enough to deal with. That one of his young people, Billy, would get shot dead adds even more to the emotional trauma. The book is touchingly dedicated to Billy. Beyond that Tony’s own father commits suicide in this season of his life too. It is harrowing stuff.

Macauley does not make himself out to be a hero but tells his tale in the most honest way. The books starts with feeling of being able to change the world. It ends with feelings of burnt out and moving on. There is a warmth about Tony’s love for the New Lodge, a real passion for peace in his city and passion for the young people that he attempts in his stumbling way to bring hope and a purpose to.

Since Paperboy, the first instalment, Tony has been taking the identity of a pacifist in a war torn city. Early on he had little understanding of what a pacifist was. In Little House On The Peace Line he is a practitioner. It might be why one of his two hardest critiques is therefore the paramilitaries. Was violence, death and mayhem the only way to put forward their cause.

The Church also receives Macauley’s ire! He speaks of the influence of the late 80’s movie Witness starring Harrison Ford and through that discovering the pacifism of the Amish community. Then a Mennonite arrived to work with him and suddenly he realise that there were Churches who believed what he did - “I suppose pacifist Christianity was never too popular in these parts”. That reality is a huge frustration to him and sadly I imagine continues to be.

I have already reviewed another book on these same times in the very same place - Philip Orr - An Ordinary Kind Of Miracle. This is the subjective angle. One young man, following his faith no matter the cost, getting married, setting up home, losing his father in tragic circumstances and somehow in the midst of it all being a particle of God’s light across a dark part of a city in shadows. This is as much of a challenge and inspiration now as it was then. Fair play to you Tony Macauley!