GIVING MY MOTHER'S HANDBAGS AWAY, IN UGANDA 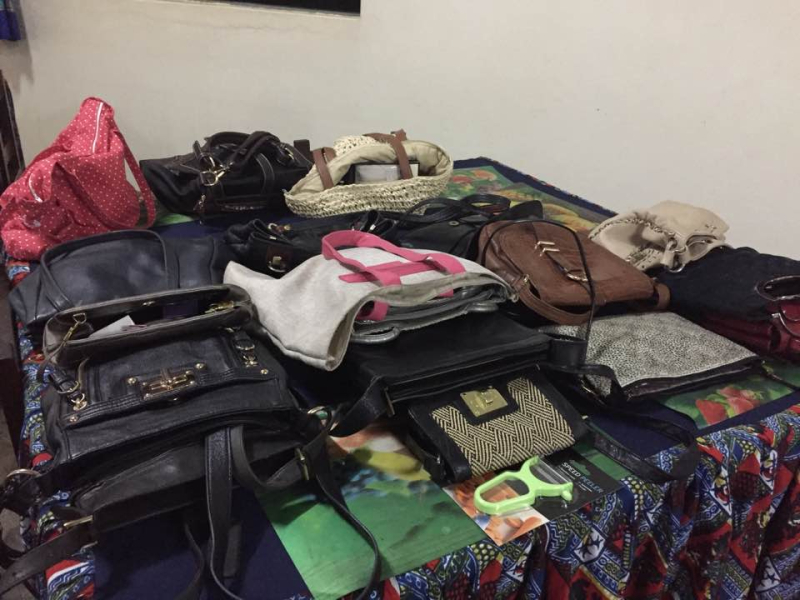 It was my daughter’s genius, my mother’s things and a real gift for the teachers in Onialeku Primary School.

When we were clearing my parents house in April, it was a mad week or two, ending with all hands on deck madness. Anyone who has had to do such a thing knows how emotional and crazy the process is. At one point, unbeknown to me, Janice found our daughter Caitlin piling my mother’s handbags into a bin bag.

“What are you doing with those, Caitlin?

“Taking them for gifts to the teachers, mum?”

Caitlin had been listening when a veteran Fields Of Life Team leader told us that the ladies in Uganda love a good handbag. When we were sorting my parents stuff into Family, Charity and Skip, Caitlin saw a very specific usefulness for mum’s bags. My mum bought quality and there were about 20 very classy handbags, all ready for a home. From there Caitlin and Janice started plotting the gifts of, and other gifts in, the bag!

I have to say that the night before we met with the teachers in our beloved Onialeku Primary School, to give the gifts, and my mum’s handbags were laid out on a table, in the Christus Retreat Centre where we were saying, it was quite emotional. However, I was so delighted that Caitlin had conjured the idea and that there would be a little bit of my mother all around Onialeku! We took ties from my dad’s wardrobe too, for the male teachers!

One of the last times I had had a good conversation with my mum, she was asking a lot about Onialeku. She wanted to know why we had still one child at that time not sponsored. She was keen to sponsor him herself. My mum never liked it when we were in Africa. She missed us and worried about her family in a faraway place. However, I knew in that conversation that she had grasped our passion and that that compassion that she had for that last sponsor child was something of what inspired me.

Mum also felt that I had never quite preached enough about how Fitzroy tithed our own building project to fund a school in Uganda.

“Why does everyone not do that, Steve?

It’s such a good example to others.

You need to challenge other Churches to do it.”

So, as I thought of her grand-daughter’s clever thoughtfulness about those handbags, I thought that mum would want me to preach about Caitlin’s example too. I hope mum is delighted that she has made so many women in Uganda happy. The delight on their faces as we gave them all a handbag was precious. I know for sure that she would be saying that I should tell everybody about what Caitlin and Janice did and to share how easy it is, with a wee bit of thought, to give to others what they will so appreciate and that we no longer need.

So… I know that many of you will have to go through the difficult task of clearing your parents’ houses. With a wee bit of imagination, there are resources of joy in the pain.

I just love that 🙂

It is indeed a difficult thing to do, I felt heartbroken. I took all my Mum's clothes and bags to the Heart foundation as it was fitting as she had died very unexpectedly of a heart attack. My beloved Dad was still alive and he passed away six years ago at the age of 95. Had to clear out again, and that was really awful. However I thank God I had them for so long.

Steve, your mom would love this! What a compassionate daughter you have raised.

Wonderful to have your Mum's bags live on in this way. Brilliant idea Caitlin