Home Archives Profile Subscribe
HAVE GOLF CADDIES TOO MUCH INFLUENCE?
MAY GOD... (SEE YOU THROUGH THE AWKWARD DANCE OF PAIN) 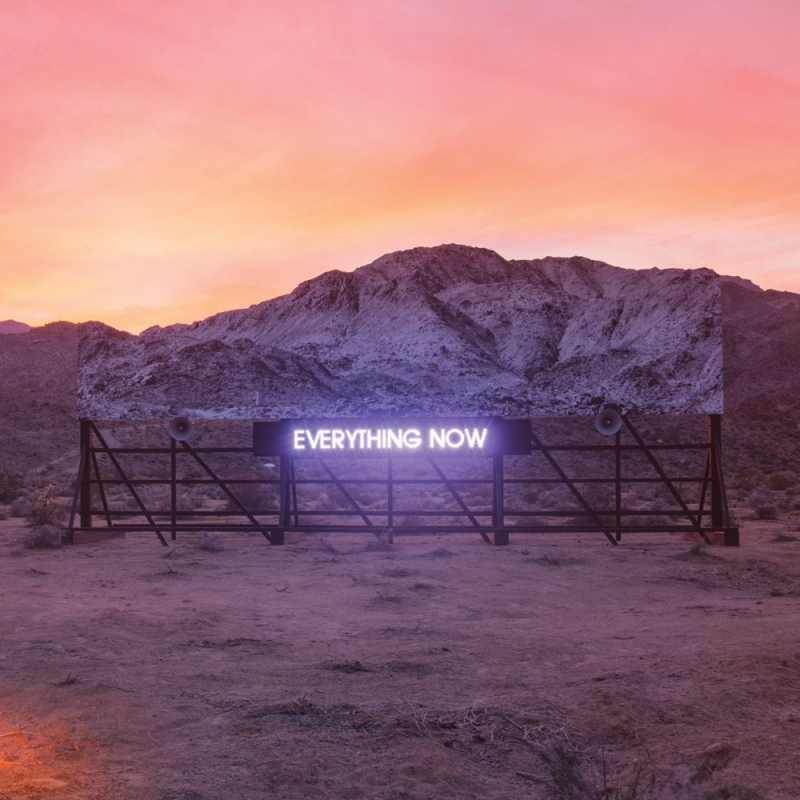 Everything Now the first single, and title track, off the new Arcade Fire record had me very excited. It was the most prophetic punch of pop to hit radio playlists I had heard since The Killers’ Human. That both band’s writers and frontmen are from Mormon backgrounds did cross my mind as more than a coincidence. Win Butler’s studies in theology and philosophy, with a particular love for Kierkegaard, adds to the intrigue.

It certainly adds to the poetic lyrics of Butler who has throughout the Arcade Fire catalogue been asking big questions of humanity’s condition and the seeking of redemption. Butler has been particularly good at holding up the culture to the light of revelatory critique.

Having been absolutely smacked in heart and soul by the single, Everything Now and working out what the new t-shirt was about that I bought at their Belfast gig, I had the sense that that cultural collide would be all over the record. And…boy it is!

But before we get to that, let’s talk about the music. With their last record Reflektor Arcade Fire had me listening to sounds that I previously did not at all like. So it is again. Everything Now is all Abba dance grooves and elsewhere Human League are not far out of the mix. It’s all glitzy and boppy and incessantly catchy.

Somehow into the lightness of the sound Arcade Fire have filled the ear candy tunes with soul colliding seriousness. I imagine though it might be a case of "those with ears to hear, let them hear” as I imagine many will miss the cultural thesis within.

As I listened to the full album I had an extra angle on the perspective. I had just arrived home from two weeks in Uganda. Having had that spiritual interrogation of my western decadent living, Arcade Fire then bombarded me with couplets that had my soul cowering.

The lyrics throughout the album seem simple in their writing but in their meaning they nail us. That opening single Everything Now, that appears three times, is about our need and expectation of having everything NOW but actually concludes that it is a fake claim that we actually have everything… or anything that counts. A week in Uganda would give us all a better clue as to what counts!

Creature Comfort is a song title that says it all. This is all about celebrity, self harm and suicide but a plea that whatever we are pray for can God make it painless! Comfort? Painless? Not words that most Africans know about in their everyday existence.

Signs Of Life is the futility of searching in the wrong hedonistic places for Signs of Life… and then doing it again. In the poorer areas of Uganda there is little time for such pursuits!

And on it goes… song after song… before Butler subtly changes the theme. A song called Good God Damn is a beautifully constructed guitar driven song. Good Good Damn begins with what seems like a luxurious, almost swaggering suicide “Put your favourite record on baby/And fill the bathtub up/You wanna say goodbye to your oldest friends/With a good God damn”. Then there seems a subtle shift, in the omnipresent word play of the record, and after saying goodbye to a meaningless world our protagonist finds that there might be a good God… damn! “But maybe there’s a good God, damn.” Too late! I might be contriving this exegesis but I think it Butler is having a gentle preach at the new atheists…

If that is not an intriguing enough take, let us go the last track, We Don’t Deserve Love. As a final subtle paragraph in the dissertation Butler finds himself in Christ’s passion. It looks like Mary has been left loveless by Jesus in the tomb but then a cry to come down from the cross and we find Arcade Fire’s Ecclesiastes' sermon with, “The ones you love always leave you alone/It’s always the Christ-types you’re waiting”… OH MY GOODNESS ME!

Brilliant as a pop record. Staggering in its brutal exposure of our empty western existence, even it you haven’t been to Africa recently. Utterly fascinating in the spiritual conclusions! Do you reckon I like it!