TREASURE OF THE BROKEN LAND: THE SONGS OF MARK HEARD 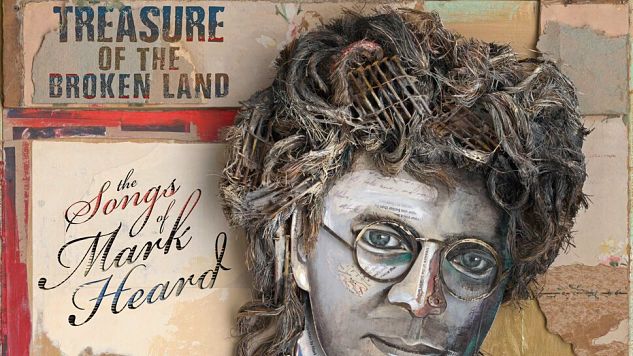 Mark Heard? What do you mean you haven’t hear of Mark Heard. Here is as good an introduction as you are likely to find. I mean who wouldn’t want to listen to new songs by Over The Rhine, Drew Holcomb, Buddy Miller, Rodney Crowell and Birds of Chicago to name but five!

The thing is that this record is not about any of those amazing artists. It is about Mark Heard. Heard sadly passed away in 1992 at the age of just 41 years of age. Thankfully his untimely death was not before he had left a catalogue of work that was literally second to none in the Contemporary Christian Music industry.

When I say CCM, one of his greatest accomplishments was to so raise the bar of that genre in musicality, production, poetry and theology that he pushed the envelope and in his trail so many artists pushed out too and took their art out of the cheap cliched ghetto of Christian Book Shops and into the real world with real music about real issues, with real faith running through it!

So here we are a staggering 25 years after Heard left us and a collection of the very best in Americana musicians are wrapping their voices, guitars and so much more around Heard’s very best work. All the songs are taken from the trilogy of records that Heard released between 1990 and 1992, Dry Bones Dance, Second Hand and Satellite Sky.

Speaking of personal taste I love those three records so much but my one criticism would be that at times, on Satellite Sky particularly, the fertility of Heard’s production imagination perhaps cluttered the songs. Second Hand was much more stripped back and therefore my favourite of the three.

On Treasure Of the Broken Land the curator and producer of the project Phil Madeira, with his choice of artists and varied arrangements, has given the songs so much more room to breathe.

The Mississippi All Stars version of Freight Train To Nowhere and Birds Of Chicago’s Rise From The Ruins open the songs in brand new ways.

Then there are the bluesy country rock guitar strut of Red Dirt Boys’ Satellite Sky and Drew Holcomb’s stunning Tip Of My Tongue which would have sat neatly on The Rolling Stones’ Exile On Main Street!

Over the Rhine’s Look Over Your Shoulder and Lily and Madeleine’s What Kind Of Friend tenderly reflective. Sarah Potenza’s Lonely Road is given the perfect atmosphere and dramatic effect!

All of it shines revelatory light on the incredible poetry of Mark Heard. Heard points his sharp mind, heart and soul at many things but three angles reached into my soul early on.

First is his introspective soul searching:

“And what kind of friend survives the night in a frightened sense of self-defence?

What kind of friend can take the ache of losing face for friendship’s sake?

What kind of friend do friends become when the heart says “kill” and the soul says “love”?

What kind of friend could I become?

What kind of friend am I?”

- What Kind Of Friend

Perhaps his most potent punch comes when Heard points at the spirit if the age:

But they have packaged our virtue in cellulose dreams

And sold us the remnants 'til our pockets are clean

Til our hopes fall 'round our feet

And we end up looking like what we believe

She's heard it said by the drone in her head

That the wages of spend is debt

Find the treason in the diesel and the smoke

Ultimately there is hope that lies within:

I see you now and then in dreams

I believe I will hear it again

God how I love you

Treasure of the broken land

Parched earth give up your captive ones

Blow soon upon the hollow bones

- Treasure Of The Broken Land

Every now and then I seem to dream those dreams

Where the orphans suckle and the slaves go free

Where the blind ones see and the dry bones dance

You get the drift - literary and spiritually deep, caressing and colliding faith and the ailments of the age. Thank you Phil Madeira for redressing these songs in an eclectic record with an Americana cohesion.