The Unforgettable Gig: When U2 Rocked The Kings Hall - Documentary About 30 Years Ago Today 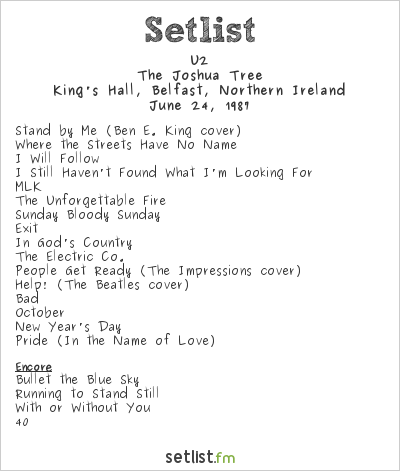 Today. 30 years ago. We were all at the Kings Hall in Belfast. It was U2. Joshua Tree. Back in March I was honoured to narrate a BBC Radio Ulster documentary about the concert (link below). Thank you to Karen Atkinson for involving me in the project. It was a lot of fun.

A highlight was the recording of  a wonderful conversation with artist Colin Davidson outside Game on High Street. It was as close to the exact spot as we could get to where the old record shop Makin’ Tracks was. Both Colin and I were outside that shop at midnight on March 8th 1987.

Within seconds we were abuzz with memories. Being an artist Colin’srecollections were particularly vivid. He reminded me that there was a security barrier just 100 yards away. As Colin pointed out, Belfast city centre was closed down at 6.00 during The Troubles and here it was alive with excitement near midnight on a Sunday night!

Those security gates had to be opened when two Mercedes arrived with U2 inside. They were in Belfast to make a recording for BBC TV's Old Grey Whistle Test at the King's Hall that day. Colin was closer to the front of the crowd than I was but even he didn’t see the band going inside. He did see the Edge’s hat and assumed that the guitarist was underneath it!

It was again Colin who took us forward a couple of years. When Rattle And Hum came out in October 1988 almost every record shop in Belfast opened and, as Colin rightly remembered, there were 10 times as many people buying at midnight.

Of course everybody hoped that the band would turn up again. They never ever did again. I bought Achtung Baby at midnight in Dublin, Zooropa at midnight in Cork. No band appearances. Only Makin’ Tracks March 1987. I do have a vague recollection that dopplegangers The Joshua Trio did play at the Rattle and Hum release.

A few weeks before the Colin Davidson interview, Karen took Liam Creagh and I to the Maysfield Leisure Centre. Again it was longer there but outside a building site on a snow skiff cold blowy day we reminisced about U2’s gig there on December 20th 1982. I remembered that it was just as freezing outside the venue that night but inside it was sweltering. U2 whipped up a sweat and I might have used a friends scarf as a towel!

Liam had reviewed that gig and interviewed the band afterwards. It was very low key he remembered. Down to earth. That is how Colin Davidson had remembered them when they signed his Joshua Tree record in Makin Tracks.

The Maysfield concert was historic for U2 unveiling of Sunday Bloody Sunday. A song about the Northern Ireland Troubles, Bono seemed nervous as he introduced it. He told us it was about this place, assured us that it was not a rebel song and promised that if we didn’t like it he would never play it again. There are rumours that a few walked out. If they did they didn’t walk past me.

In all of this reverie I came to see how important a place Belfast has been to a band from Dublin and how important that band is to Belfast. That they came to Makin' Tracks at the height of the Troubles. That they wrote a song about us. That they played the relatively tiny Kings Hall days before they played two shows at the vast stadium of Croke Park in Dublin and not long after Wembley Stadium in London.

I actually became aware how important Northern Ireland was to Bono in conversation with Karen as we made the documentary. We were talking about the night of the Enniskillen bombing also in 1987. The IRA bombed a Remembrance Day parade. Eleven people were killed, mainly pensioners, and 63 were injured. That night U2 were playing Denver, Colorado and, during Sunday Bloody Sunday, Bono went off on one and in rather earthy language damned “the revolution”.

As I commented I suddenly became aware of Bono’s emotions. It wasn’t a cold political statement from a band who without question were fond of the political soap box. In Bono’s voice you knew that this was personal. His passion revealed his love for us in wee Northern Ireland. His declaration for peace didn’t only echo across Denver that night but in film theatres across the world for the next couple of years. It was U2 making their investment in our peace process which they would come back to again and again.

As you can tell, I loved helping out with this documentary. Karen did a great job and as well as Colin, Liam and myself there are interviews with various fans, promotors and journalists including Hot Press’s Niall Stokes and the legendary Dave Fanning.

LISTEN TO The Unforgettable Gig: When U2 Rocked The Kings Hall