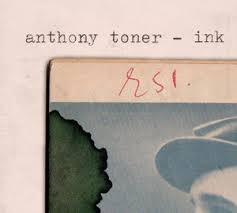 I would be too lazy to liken Anthony Toner to James Taylor. Oh I know that he has cited Taylor as an influence and I know that the guitar and voice with crafted songs makes the comparison obvious. Indeed the early guitar playing of Alphabet could be Taylor.

But… but when Toner’s voice comes in… it has a more convincing tone (ouch!). I have always found Taylor’s voice a little anodyne, almost too smooth. I cannot take copious amounts of it. I could listen to Toner all night. He doesn’t exaggerate his Northern Irish twang like a Duke Special or Juliet Turner but you know where he from. It welcomes you in.

Ink is a beautiful record. It is pastoral in a few ways. There are rivers and stars and moons. There is a sense of place. It is rooted in every day images. There are a few instrumentals that allow a voice without a vocal.

Though Ink has that Tayloresque template throughout don’t miss the variety Toner can bring with the musicianship, understated yet careful. Listening will bring many smiles and much joy from deft touches of piano, hammond organ and different guitar riffs and runs and gentle picking.

There are even a couple of spoken word pieces. The Candidate with its banjo picking rhythm and the poetic reminiscing of holding a loaded gun as a twelve year old on the wonderful Exit Wounds. There is humour and poignancy throughout, every emotion of life and love and loss.

Anthony has said himself that Ink is his most personal record. There is a lot about his father and childhood. If like me and you are visiting your dad in a Residential Home then it will hit a soul spot.

The highlights for me are the utterly gorgeous road song Light From The Stars with its “And they ask us to say a few words/When we are speechless/sometimes the light from the stars is too late to reach us.” Oh my word! Sometimes The Night too has a deep melancholy, with beauty at the core of its heartache.

The Night Prayer of St Augustine has his dad reminisce about The Bible and has Anthony running across “such a succession of prophets of letters and Gospels and names/Corinthians, Romans and Hebrews, The Acts and Revelation and James.”

Ink is a poetic work. Toner has always been a great lyricist but has he ever been better than this, less saying more as he purposely doesn’t go for two many verses packing the emotional impact into shorter songs.

The pièce de résistance is Alphabet, an extraordinary songs that does what it says in the title and takes us through every letter from A-Z. The very thought of a songwriter doing such an exercise frightens me that the contrivance will end up an over indulged embarrassment.

Toner takes my fears and scatters them to the wind, writing the most perfectly worded lyric. From the first words, “When I hug my father/We hold on tight/If he forgets who I am well that’s alright/A is for Alzheimers…” to the final gentle punch, “When you enter this world/It’s what you bring/And it’s what you take with you/After everthing/Z is for zero!” It is an utter triumph of a song lyric. I kept waiting for the contrived couplet… but not a peep.

Ink is lovely in love and mood and lyric. Put it on at the end of a long day, even a long difficult day, and use it to reflect and allow its soulfulness to wash over you.

After a few plays, I ended up thinking much more Canadian Stephen Fearing than American James Taylor but honestly if those two could be likened to our very own Anthony Toner they should take it as a compliment.