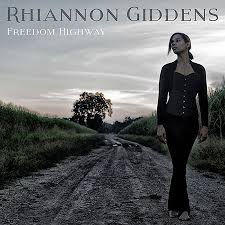 Kye’s was the last question. Fr Martin Magill and I had been in the Midwest of America for 10 days speaking at various Colleges and Churches. Our topic was Peace and Reconciliation and we were aware that our Northern Irish experience was resonating more with young American students than it had before.

Kye was a young black girl, so slight of frame that she had spent the seminar hidden from us behind some bulkier young white men. we were done for the day, and indeed the ten days, when her hand went up and she asked, “How long do you take the tear gas before you have to fight back? Because it seems after 50 years that it hasn’t worked.” Wow! It was a truly deep and heart wrenching question.

Rhiannon Giddens is THE voice in modern music. From her time in banjo driven string band The Carolina Chocolate Drops to joining T-Bone Burnett’s Dylan collaborating The New Basement Tapes with Mumford, Costello, Goldsmith and James to her debut album Tomorrow Is My Turn Giddens has been building her legend.

The purity of the voice. The artistic blending of folk, jazz, country, blues and pop. The way she then uses such resources to say something more. Freedom Highway is her most varied set yet and at the same time the one eyed. It’s her masterpiece.

On Freedom Highway, Giddens takes Kye’s question to us at Calvin and lives inside it for twelve songs. She goes back further than the 50 years Kye mentions and also brings it right up to the now. She uses that voice to be the voice for justice by becoming the voice of many characters who have lived the history of the injustice!

The opening song At The Purchasers Option is set way back in the world of black slavery. Giddens has explained that she found a newspaper advertisement from the 19th century. The ad about the sale of a woman was bad enough but the last line included a nine-month-old baby, available "at the purchaser's option." That dehumanising hit Giddens hard as it should all of us.

Birmingham Sunday is the song here that hit me hardest. It was written by Richard Fariña whose sister-in-law Joan Baez has covered it too. It is about the Ku Klux Klan bombing of 16th Street Baptist Church, Birmingham, Alabama in 1963 when four young girls were killed. I have visited Birmingham a few times and the Church. A few years ago I read While The World Watched by Carolyn Maull McKinstry, friend of the four dead girls and only a few yards away when he bomb went off.

Better Get It Right The First Time is for Kye’s generation. It is the most contemporary sound on a record with a wide myriad of musical soundscapes. It even includes a rap and can only be seen as a radio friendly anthem for the #BlackLivesMatters generation.

Answers to Kye are maybe not explicit on Freedom Highway but hope and advice for the struggle is, all over the grim realities of how white America has treated their African American brothers and sisters. This is a history lesson and a relevant message right now. It is an album that we need.

“You can take my body,

You can take my bones,

You can take my blood,

But not my soul.”