Home Archives Profile Subscribe
BOB GELDOF'S IMPACT ON MY SPIRITUAL LIFE - The Boomtown Rats Live in the Mandela Hall 24.3.17
AN OPEN LETTER TO OUR POLITICAL LEADERS... FROM.. FRUSTRATED.

PAUL MCCARTNEY - FLOWERS IN THE DIRT... THE CLASSIC RECORD THAT GOT AWAY 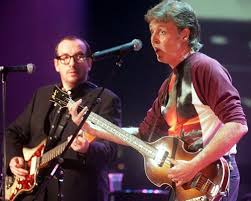 Next in his Remastered Series Flowers In The Dirt is a revelation of the very great album slipped through Paul McCartney’s hands!

Flowers In The Dirt was seen as a return to form for Paul McCartney after the failure of Pipes Of Peace to follow the strength of Tug Of War and then Press whose experimental eccentricities was a major disappointment or at least misunderstood. Add the flop that the film Give My Regards To Broad Street and the thumbs up Beatle needed a… well… a thumbs up!

The lead off single My Brave Face, co-written with Elvis Costello, was the strongest McCartney showing for many a year. There was a sense of old Beatles, a crisper rockier sound. McCartney toured this record, the first time he had done so since he broke up Wings a decade earlier and with Beatles’ covers mixing in more freely since his first band broke up, this was all hailed as a new fresh start.

The extra Cd with this deluxe edition has nine song demos of McCartney’s work with Elvis Costello. I have had a bootleg of these for many years (smacks wrist for being so naughty) and it is wonderful to at last have pristine sound quality to this treasure trove of co-writes.

Costello was a perfect foil for a poppy Paul McCartney, the half of the greatest songwriting partnership in the world that could on more than a few occasions sound a little light and soft. John Lennon had, like sand paper, roughed the smooth off McCartney’s Beatles’ days. Think Paul’s “It’s getting better all the time” to John’s response, “It couldn’t get much worse.”

Costello could have done that for McCartney again. Indeed he did. My Brave Face and You Want Her Too are the best songs on Flowers In The Dirt, with that caustic Costello voice and lyrical twist; more Lennon than Lennon himself.

The rest of the record lost a little from Costello’s departure from the project. It seems that there were artistic differences. Other songs like This One and Put It There are fine but a little light and fluffy alongside his co-writes. The extra CD with this release tells us what we missed. So Like Candy for instance, is so good!

Nine of the songs they wrote, some that ended up on Costello albums, some on McCartneys, are here on the extra disc. The recordings are rough, yes, but oh so worthwhile. What if they had followed the whole thing through? Adding the other songs that appeared on Costello records - Veronica, Shallow Grave and Pads Paws and Claws among them.

Having said all of that, Flowers In The Dirt is a stellar lump of McCartney.  Producers like Froom and Horn gave it the smooth pop accessibility that made it deserving of its commercial success. It deserved the response and it was a good launch pad back into touring again.

The Costello project might not have been the McCartney comeback that he wanted. BUT… if he had held his nerve… McCartney was on the very cusp of something utterly extraordinary in the Costello partnership. Had he not let Elvis leave the building he might have had one of the great post Beatles’ solo records, maybe even up there with Band On the Run.