Home Archives Profile Subscribe
AN OPEN LETTER TO OUR POLITICAL LEADERS... FROM.. FRUSTRATED.
DRY BONES DANCE - A Sermon In 7 Quotations 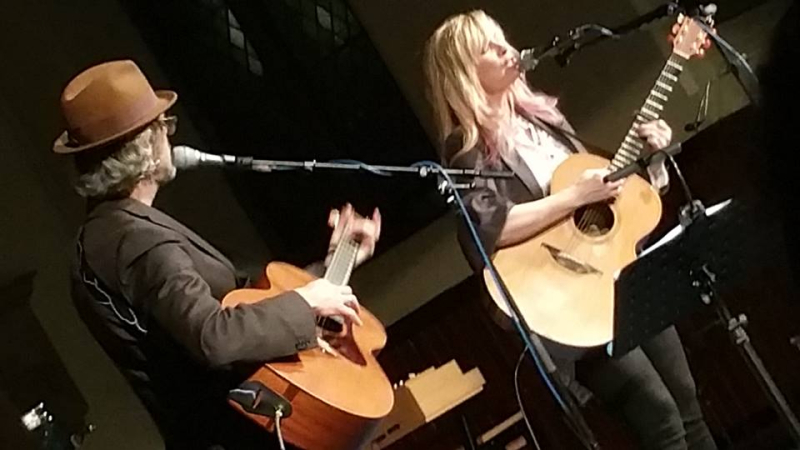 This review is personal. I have longed for this night for many, many years. There are other places on my blog where you can read about my 25 years of obsessive love for this band. Here they were, where I preach on a Sunday. Bruce Cockburn was one thing a few years ago but here, at last, were Linford and Karin - Over The Rhine! Thank you to promotor Nigel Martin for taking the risk!

And what a beautiful piece of heartache it all turned out to be! I have never basked so much in a sound. Linford’s piano playing carried us away and Karin’s voice gave us flight, the gentlest swoop of an eagle… or an angel. The harmonies washed like a soothing balm and from within lyrics redemption pushed into the veins of my soul.

In a conversation with Linford and Karin the evening before the concert I was sharing how their friend and producer Joe Henry had recently been in town with Billy Bragg. They shared the gorgeous little rumour that Henry might be currently working on new songs of his own. Linford added, “That man opens his mouth and literature pours out.”

“You do pretty well yourselves,” I responded. Their sound man Chad immediately shared his favourite Over The Rhine line and I suggested that “The last time I saw Jesus I was drinking bloody Mary’s in the south,” was the best line in rock music. I might have been exaggerating though it has gotten me thinking. Whatever, throwing out the opening line from Jesus In New Orleans got it in the concert set list. They blamed me if went wrong. Of course, it didn’t.

Jesus In New Orleans is the song that for me best sums up the genius of Over The Rhine. There is the poetry and the social observation. Then there is the personal introspection:

“I know I'm not a martyr

I've never died for anyone but me

The last frontier is only

The stranger in the mirror that I see.”

But the song doesn’t just burrow into the personal soul. It looks out at the condition of our universal humanity:

How we put to death the one's we need the most?”

Throughout there is a subtle theology. Jesus appears when you least expect it:

What's revealed when you're not looking all that close?”

While you’re drinking Bloody Marys, Jesus can appear in a woman with Gospel singer Dorothy Moore on the jukebox singing out the clue.

Finally there is less subtle theology:

“But when I least expect it

Here and there I see my Saviour's face

Falling for the entire human race.”

And that is just one song. The entire set fills out the raison d’ etre. Literature pours out across these harmonies and Karin’s angelic voice. There’s seeking, catharsis and hopefulness. Linford, whose between songs patter is dry, humorous and insightful, says how good it is in days like this, referencing the current state of America, that we have songs to converse with.

The stunning crafted songs fill the fastest two hours of my life, where I simply want to stay in the moment and never have this sound in my ears cease. Highlight are too many to name - Drunkard’s Prayer with its water and wine perfectly placed at the front of Fitzroy Church and adding some whiskey; Meet Me To The Edge Of The World is like Wendell Berry with melody; I’d Want You an apocalyptic love song in Trump times; Born with its yearning to love without fear.

Best of all… Let It Fall, co written with Madonna’s sister Melanie, partner of aforementioned Joe Henry, with its spiritual giving over to grace; the beautiful poignancy of Poughkeepsie about suicide; and the closing All My Favourite People that says it all about this gathering, as a couple’s songs bring us into spiritual community under the roof of a Church.

My Church. Which makes it personal again. Over The Rhine have been in Belfast for two days but with a sickness that had cost them to cancel their last two gigs in the Netherlands they are doing no meet and greet after the show. I sneak them to the back door, give them a hug and they are off up the road to their hotel.

I turn back and smile. That just happened. I have waited a long time. I dragged a lot of people out to hear it. Over The Rhine didn’t let me down. I go back into the most post concert satisfied bunch of my favourite people. I smile and start the dream to have them back!

A good and truthful review. I, too, have waited probably 25 years to see Over The Rhine. I remember, way back when, hearing the songs on mix tapes, but (growing up in a small town) not being able to find the records. Over the years, I eagerly attended Larry Norman and Randy Stonehill shows, and many others in between. Most of my records came from purchases at the back of a concert hall.
But, OTR eluded me. I always managed not to know when they were on tour. Finally, a long time dream to catch them live, and twice in two days! And, worth the wait it certainly was. OTR were all I expected, and more. If anyone ever doubted that music is a gift capable of lifting the soul to a place closer to God, then they need to experience OTR. Real life merges into the spiritual, making a connection we so often miss in the grind of daily life. God is visible in all things, being glorified, or being visibly perfect against our well meaning failures.
The Belfast concert was special for me, not just being the first, but because there was a sweet spirit of love, fellowship, appreciation . . . blessing. We missed so much growing up in our little country - nobody came here. We lived our lives through the words of others, from fanzines and NME articles, and jealously watched concerts on TV. It's all different now, but our generation still knows how to show our love for the blessings (there's that word again) of the past and the gifts of the present. The show was a little slice of heaven on earth. Something to be cherished and savoured for a long time to come.
The Dublin show was excellent too. Wonderfully crafted in another beautiful setting, with another appreciative audience. It was humbling to look around at the audience and to visibly see the joy on their faces, just to be there. Most of them were seeing OTR for the first time. Jesus in New Orleans being again dedicated to Steve Stockman for his friendship and support tells the story of how special the previous night was.
All in all, the songs now have deeper meanings, the bond is stronger, and life just seems that little bit better for having crossed paths with Linford and Karin.
Genesis 12 v 2-3 tells how God blessed Abraham, so that all nations might be blessed through him. Following from that teaching, OTR have certainly shared their blessing. What a privilege to have been part of the experience.
God's blessing to all who made this happen, took part, and experienced.

Delighted your dream has come true at last!

Great review Steve. On Thursday night the room where Fitzroy church meets became a 'thin place'. Beautiful on multiple levels. Aesthetically, musically and most definitely spiritually nourishing. We felt privileged to be there. Joining you in the dream to have Linford and Karin back.

Over the Rhine and Steve Stockman have always gone together for me. My husband saw them at Greenbelt and ran back to our tent to tell me I had to go and listen to this band, and I first heard Karin sing at a Q and A session that you did with them that night. I was hooked from then. Last week, at Cecil Sharpe House in London, that beautiful piece of heartache settled deeply on my soul. Thanks Steve for this fantastic review and for spreading their heavenly music further into this redemption-song-needy world.