Home Archives Profile Subscribe
PAUL MCCARTNEY - FLOWERS IN THE DIRT... THE CLASSIC RECORD THAT GOT AWAY
OVER THE RHINE LIVE AT FITZROY, BELFAST 30.3.17... THIS IS PERSONAL

AN OPEN LETTER TO OUR POLITICAL LEADERS... FROM.. FRUSTRATED. 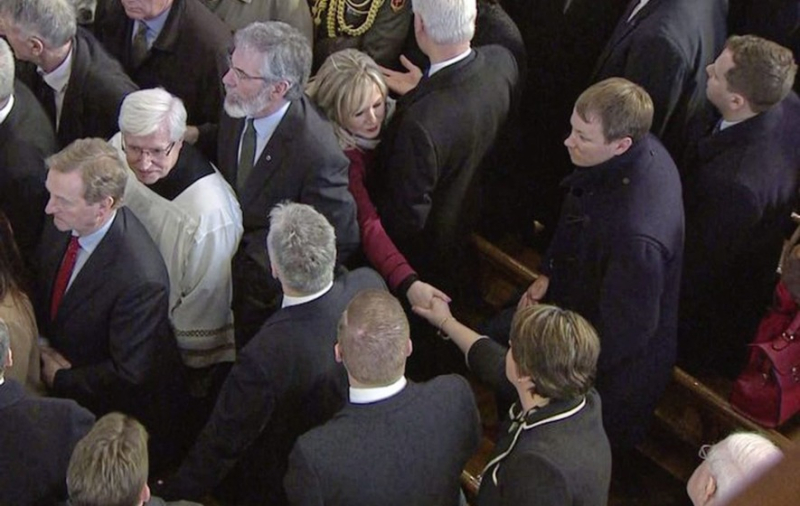 We are very frustrated at the bottom of the hill. We voted for you and our taxes pay your wages. We are those you are working for.

We have come out of a dark time. Your predecessors, and indeed some of you, brought us out of a bloody and heinous conflict. We long that that would be consolidated and moved froward so that the next generations might not suffer what we had to for so long.

As we watch our news today and look up the hill in the hope that peace and prosperity would trickle down, we are frustrated, almost angry. We have been through two elections in ten months. We see everything stalled and our leaders seemingly playing a 6th Form Debate with each other. We feel that you are living up to our television comedy, “Don’t blame yourselves… blame each other.”

At the bottom of the hill, on the streets and across the fields, the people of this country are asking for more from you. We want progress. Dare we say it, we want compromise, so that peace and prosperity might flood down the hill.

God has been betrayed by his own. They have caused enmity. They have hurt him, caused him deep pain. He has the power. He could annihilate them. It would be in some ways justice.

God doesn’t. He becomes one of them, empathising with them. He loves them. He asks nothing from them in restoring the broken relationship. He serves them, his enemies. Instead of demanding that his enemies take the justice they deserve, he actually sacrifices his own life in order to deal with the injustices that were done to him.

It is a bit mad. The Bible calls it grace. It is a generous reaching out across enmity to the other. It is unconditional. With grace the one who was has been hurt moves first to restore the fractured relationship. This sparks change in those reached out to.

This is brave and courageous stuff. It is not easy. However, it is our only hope. It is the recipe for an extraordinary leadership perhaps best illustrated, in human terms in our recent history, by Nelson Mandela.

The idea at the centre of this, that we would urge you to bring into play, is the “common good”. We know that you are frightened of losing your vote, your seat, your piece of the power. Leadership that will be remembered has to climb outside that self obsession and ask what needs to be done for the common good of the entire population whether they voted for you or not, whether they are perceived as your neighbour or your enemy.

So, go on, make history. Be leaders that this country will talk about for centuries to come and not just argue about on some morning radio programme.

We are beginning to wonder if you have the vision or the courage. Show us you do. Do the business. NOW!

Grace to you all,

The Frustrated at the bottom of the hill.

Get things sorted for good of us all.

God help us! How we need a party which welcomes all of us and works for all of us. I hear the words equality and respect all the time but it seems respect is lacking. As I said God help us!

Why did we vote for you people? Oh yeah. Because we trusted you to do the job, you told us you would do, if we voted for you !!!

If I didn't get things done at work .. like most of us hard working people .....we would not get paid WHY should you be any different!!!! Most of you are there by default so get your finger out and do something make our country great . If you can't agree on who's country it is then get paid by the Irish and be Irish or be British and keep your getting money from Britain ...... for nothing so far ... how many years????????

We all live in this tiny land. Deflate the egos, cease bickering, demonstrate leadership and govern with integrity as all our people deserve peace and prosperity. Grace is a wonderful thing.

Agree with this, well said.

Stop acting like children.... get in with the job you are privileged to have.

We need Stormont to either work or not exist.

We are the silent MAJORITY.Please listen to us and take the time to read and reread Steve's plea from our hearts. We reject NO SURRENDER which is seen being laughed at by the perpetrators. We have lived through the results. Ask God to give you His grace and love for His people and His country
Carmen.

Only hope that the folks on the Hill will take the time to read this and then maybe do something.

Get on with the job you were elected to do.

Working with young families im seeing the cut backs FIRST HAND and its disgusting you are all behaving like small children who know no better Get your act together ..we all working so hard for an honest days pay ..you should not get a penny give it to the budgets who are working out at the coalface helping vulnerable people and their families

Please get on with the job you were elected to do.

Amen to all of that. Get on with the job!

Stop their wages if they can't do the job......see how quickly things change then, or maybe everyone of us should vote for any other party apart from the 'same'. Two that never agree!!

Well done Steve!
The churches could help by showing genuine cooperation & by demonstrating mutual respect that might thereby allow the politicians to follow their example!
In South Africa the lead was given by the churches! Why not here?

Please Please. You guys on the hill get your act together.Maybe you could start by being friends and sharing ideas for our Country.If your not in Government in Stormont. No wages. Majority of folks who are laid of or quit their jobs dont get paid but sign on for benefits. You do the same. Im sure someone can point you to the benfit office in your area.

We need you to stand and be counted. Stand for peace not war you are letting fear rule be brave step out and say ok let's move forward togethe. I remember as a child the army filling our streets most of them only boys themselves. I worked beside the most bombed out hotel I claimed baracaĺdsto get home. I remember the horror from both sides of our communities. Polictions used fear to make us decide and hate. I dont want that for my children and grandchildren. I want peace and prosperity for them I want them to live here and not run away. To see opportunity in this land for the young so that they don't need to leave for well payed jobs. We need a budget a health service school working together and companies wanting to be here and build a live working society for all not just the few. Please do what ever it takes. Be brave.