STEPHEN FEARING - EVERY SOUL'S A SAILOR 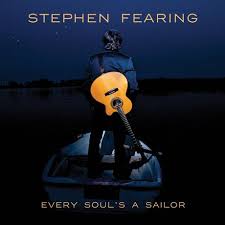 I have been a Stephen Fearing fan since Janice and my first gig date. It was August 1989. We went to see Gregson & Collister at the Queen Elizabeth Hall at The Royal Festival Hall in London. When this young guitarist from Canada who had lived in Ireland played an instrumental of Be Thou My Vision we decided to have it at our wedding and did, 7 years later! A few of his own songs and a Joni Mitchell cover we were taken and taking home his debut album.

A few years later I got the opportunity to sit beside Fearing in an RTE radio studio for a late night live session. I was with Iain Archer who had just shared a bill with Fearing in Dublin. Archer, co writer of Hold Back The River (James Bay), Lightning Bolt (Jake Bugg) and Run (Snow Patrol), is a very gifted guitarist but as we left the studio that evening Iain was feeling that he wasn’t good enough to string Fearing’s Lowden guitar!

In the twenty five years years since, Fearing has worked with Canadian collaborative Blackie & The Rodeo Kings, another Belfast man Andy White and produced albums for Canadian songwriters Suzie Vinnick and another friend of mine Eric Angus Whyte.

Through it all, in my opinion, Fearing has simply got better and better. His guitar playing acoustic or electric is imaginative, versatile and exquisite. His songwriting is of the highest quality. He has a voice that is warm and draws you in. Once drawn in, he has a rare ability to touch on the soul nerves with pointed truths of love and life.

“You’ve got to find love and compassion, like an old friend, every day

For when love falls out of fashion, and the world is old and grey …”

Red Lights In The Rain is a yearning ache of loneliness -

Oh the insightfulness of Gone But Not Forgotten, and its profound insight on love and a cracking literary couplet to tell it: -

“Love is the pearl you leave behind

Shining like a secret hidden in between the lines.”

“Well they all line up

It’s the saddest thing I ever heard.”

Drawn towards the light

With blind imagination we go swimming in the night

And the guiding star of fate shines for our mortality

Every soul’s a sailor

Rolling on the sea”

There will few collections of songs released this year as consistently strong, across the record, as Every Soul’s A Sailor. There is a spiritual pearl to Fearing’s songs, hidden secrets, indeed, between the lines. His songs have a soul nurturing quality that is lacking among his peers.