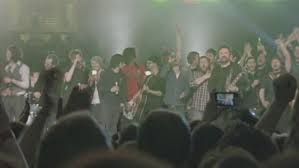 Remember The First Time. It was a might of old memories remembered and brand new never to forget new ones. It was the great idea of my old mate Adam Turkington wonderfully followed through by the BBC. It was one of the major re-opening events for Belfast’s historic Ulster Hall, all beautifully restored and bringing reminders of the great gigs down through the years. My very first rock concert was Rory Gallagher right there almost where I was standing in January 1979, delayed for four days because the winter weather cancelled the Larne-Stranraer ferry! My very favourite gig ever was The Waterboys here in 1986 but more of that later. Tonight we celebrated fourteen Northern Ireland rock acts from the brand new to the legendary. At no other time in our history could such quality have appeared on the same stage. It was a night to be very proud. Where do I begin?

Well the beginning was pretty special. I walked in just as The Lowly Knights and their loose and brilliant twelve man and woman travelling show broke into Divine Comedy’s Something for The Weekend. I love these guys and gals off and on the stage and to see them here in this venue was a natural but wonderful thrill. It would have been enough but then I glance round and see that Neil Hannon (Divine Comedy) is standing right behind me with my good friends Peter Wilson (Duke Special) and Paul Wilkinson (tonight playing with Iain Archer and Duke Special but Pauk Pilot in his own right!). How will Mr. Comedy react? On the conclusion I glance round and say, “Great songwriter!” to which he agrees with a triumphant and very proud scream of delight; he left honoured!

The deal this evening is that each act will do a song of their own and a song they heard at a gig in the Ulster Hall. I had been asked during the day which song I would have chosen and my immediate response was The Waterboys’ Fisherman Blues which I heard here in April 1986, before it was recorded, with Steve Wickham’s fiddle blowing my soul open wide. So as Hannon leaves I lean over, give Duke a hug and ask, “What’s your cover?” “Fisherman’s Blues.” Wow... but even more on that later!

After an impressive Kowalski, Cashier No 9, of whom I had heard great things, played with real authority and gave AC/DC’s Rock N Roll Damnation a sense of art! Then up came The Panama Kings whom I have more subjective interest and whom I had never seen live. World renowned journalist Stuart Baillie had waxed lyrical to me about these boys just a couple of weeks before and he introduced them with his belief that they have the style and swagger and strut to go the whole way. They delivered with an erudite authority and re-thought and re-freshed Ash’s A Life Less Ordinary which gave me another off screen moment. I spotted Ash’s drummer Rick in the balcony with his folks, with inside knowledge that an Ash cover was about to start. It took him a moment for him to catch on but then a smile of pride and recognition had him whispering to his parents that it was their song. He nodded along knowingly and like Hannon before him looked honoured!

What I hadn’t realised was how many hard rockin’ local bands we had and tonight the chest was pounding at regular intervals. La Faro and a combination of Derry’s finest Jet Plane Landing and Fighting With Wire kept the thud pumping, the latter’s cover of Rage Against The Machine’s Know Your Enemies testifying to the power of music to change lives.

On the mellower side, Foy Vance got perhaps the loudest cheer of the night and did a quirkey Crash Test Dummies’ cover before singing a brand new song that was perhaps the only time in the entire evening that the crowd was silenced to a hush. Vance has jumped over many who could have been ahead of him to be one of our brightest lights.

Iain Archer is another songwriter of world class quality and his Songbird was beautiful. When he then suggested introducing some friends my students wondered if it was going to be me doing a freakish rap in a Ballymena accent (check UTube for said performance – AAAAAAAGHHH!) but to the audience’s great relief it wasn’t me but Gary Lightbody and Nathan Connolly from Snow Patrol which I guess would be like introducing Bono and Edge at a gig in Dublin. The crowd were rather pleased! Introducing a cover of The Frames whom Iain’s band for the evening, Paul and Phil Wilkinson, had supported as The Amazing Pilots with Iain on guitar was again met with appreciation though to be fair their Lay Me Down was not the slickest cover of the night but they held it together! Then Iain with his former Snow Patrol buddies played acoustic versions of Chocolate and Chasing Cars. It was the latter song that almost got me banished to the spare room when I arrived home to tell my wife that Iain and Gary had dueted on her favourite song!

Heading to a finish and Snow Patrol have already been! It is again a mark of the quality that this small little country has and is producing. Neil Hannon is a peculiar wee nodger and plays that role so wonderfully well. He struts out to his upright piano, makes a funny little quip to the crowd and sings Tonight We Fly as a transcendent celebratory hymn. A song about rising above everything to find life in all its fullness right here on earth, it blends beautifully his Bishop father’s doubt and belief with his own agnostic rock star doubt and belief. Suggesting that doing covers was like being on X factor he then defuses such a crass reading of the evening by adding that they probably wouldn’t do The Pixies on X Factor and takes those very Pixies and strains the guitar blitz out of Gigantic to give it a peculiar wee nodger like arrangement that was still pretty darn huge! He then gives a peculiar wee nodger salute to the crowd and walks off like the divine comic he is. (Thanks to my ex-Intern Julie Ann for the phrase peculiar wee nodger – that’s what she called her boss!)

Duke Special? Another pixie like dude with his own peculiar eccentricities and not just on his head was next! Well, as I said, he was doing my song. In April 1986 The Waterboys were blending their big music with Irish folk and brought it to The Ulster Hall before they had even captured it on record. Fisherman’s Blues was spiritually breath taking for me and watching the elfin Steve Wickham whizz across that stage in a mesmerising fiddle trance will live with me forever. That Duke would do it tonight was perfect and if perfection can then be trump carded that is what the Special one did because who was his guest musician for the evening but Steve Wickham himself. It was a slower vaudevillian arrangement in keeping with his Dukeness but it was Fisherman’s Blues and the chains were falling off my soul again in that spiritual climax to a great, great song. It was then Duke’s own Diggin’ My Own Grave which I love for its quirky audience participation juxtaposition with the serious confession of the verses. Tonight though I missed his good buddy Chip’s digging actions.

My most satisfying anorak moment of the night was during Ash’s Mrs. Robinson. You felt sure they’d do Teenage Kicks as they have even released it as a b-side and Simon And Garfunkel isn’t the most obvious for the punk pop Downpatrick noise makers. Yet, Tim Wheeler’s accessible pop melodies have always belied the band’s heavier sound. Anyhow, my mate whispered that surely Simon and Garfunkel hadn’t played the Uslter Hall and I wondered had Paul Simon as my wife had shared the Dublin train with him the day after a Belfast concert. And then it came to me, all that useless knowledge I have collected in thirty five years of pop obsession, so I whispered back I think it’ll have been The Lemonheads. Seconds later Wheeler confirmed my genius and I had a smile that might have needed a bigger venue to contain! For their own they did their own brand new single... released by Annie Lennox... Shining Light which actually in the link of Lennox and Simon confirms the high echelons of where Ash’s songwriting art really sits.

Headlining with Therapy was a surprise and a risk. People were certainly making for the exits before they arrived on stage and for sure a couple of other acts would have held onto the nominal concert goer. Yet, they were rightly announced as the band who started the succession of great bands that the wee Province had produced since they appeared on the scene from the back waters of Larne and Ballyclare back around 1988. Andy Cairns language was choice and must have had the live BBC broadcasters stressed out to high heaven but their full onslaught rocked out. Their cover of Stiff Little Fingers’ Alternative Ulster was great and reminded you that that riff, that got its worldwide showcase in the movie Hi Fidelity, is simply as good as came out the of punk rock era. All that was missing was a Teenage Kicks and right on cue there it was with all fourteen acts taking to the stage for a finale that again basked in the amazing amount of rock n roll genius that has come out of a wee country with no more than one and a half million people! That I knew personally at least half the number on stage and that the bass player from Ash was the only one of the entire cast who tried to look like a rock star made me even prouder!

All in all it was a gig to remember. The old Ulster Hall newly decked out in tastefully restored finery got an awesome new baptism and we all got to simple be astounded at the strength of our local music scene. As we left the building with everyone smiled out and gloating at having been there, only a couple of questions; why were the only women performers the backing singers for The Lowly Knights?; and why was there no ranting united rock n roll front against the killing of two soldiers just a few days earlier. Peace in Belfast may need to go deeper if it is going to take longer lasting roots but the short term benefits are obvious for all tonight; a busy music scene with art finding a profitable as well as prophet-able place. This is our alternative Ulster, let us keep it!