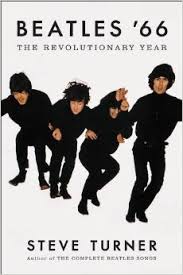 The credits of Ron Howard’s brilliant documentary of The Beatles’ American tours, Eight Days a Week, were hardly finished when I thought, “I cannot wait for Steve Turner’s new book.” Howard set up many of the questions that Turner could help answer.

Steve Turner on The Beatles. I was always buying that. I read everything Steve Turner writes… Van Morrison, Johnny Cash, Marvin Gaye, Eric Clapton. Jack Kerouac for goodness sake. One about the song Amazing Grace. One about the band playing on the Titanic when it sank! Without his books Hungry For Heaven and Imagine I probably wouldn’t have written any of my books or be blogging at all.

He has of course already written about The Beatles. With my love of theo-musicology The Gospel According To The Beatles was always going to be fascinating for me and The Beatles: Stories Behind The Songs is literally always on the edge of my shelf, delved into very very regularly.

Howard’s movie was like watching a contemporary news reel. Here were the biggest pop band on the planet at breaking point. Playing to too many fans with too little PA, so that the screaming girls drowned out the music. The playing had lost any sense of satisfaction. The progress in their art, that they desired, was impossible.

Add to that the new controversies. They just got out of The Philippines in no more after insulting the President and his wife. Then John Lennon’s comments about Christianity had caused record burnings and ominous Klu Klux Klansmen talking around outside venues. There was a death threat too.

That circus was ok for maybe a year but three years in and The Beatles were bored and close to breaking point as a band and as individuals.

Yet, the film made me think there was more. They were now four men in their mid twenties, three married and the other in a three year relationship. The ferocious pace of the last three years was now interfering with their lives, love and personal development. The world’s most famous and successful musicians get the first opportunity the let their minds, hearts and souls catch up with bodies that have been in perpetual motion for years.

Turner’s book lives up to all my anticipation. He does what he says he intends to do. To slow down a year of The Beatles careers and take time to unpack every month, every incident, most interviews and every piece of music making. Let’s not take a sentence or paragraph to note an event. Turner sets out to take us into the event and spend longer, like a CSI detective seeking every little bit of meaning.

It works. It made me feel that since my love for The Beatles went obsessive in the summer of 76 that I have been gazing across their timeline from a vertical place. I have been looking down, glancing across it, always scanning the songs and events.

Turner takes us horizontal. He takes us month by month through what, I think he proves, is the most crucial year in The Beatles history, the history of rock and in the lives individual lives of Paul McCartney, John Lennon, George Harrison and Ringo Starr.

I couldn’t help but thinking that where the four Beatles went for the rest of their lives was set on course in these months so meticulously catalogued with Turner’s well known thorough research.

George Harrison’s lifelong love of eastern religion starts here as he meets Ravi Shanker. John Lennon’s five years in retirement “watching the wheels go round and round” seems obvious in his laziness and desire to live outside the Beatle madness. Paul McCartney’s work ethic and ability to innovate and keep it all accessible suggests he’s the one who’ll always be the pop star. Ringo? He is always Ringo, the drummer. Brian Epstein’s sad end seems almost obvious.

Turner’s research takes us through the best interviews of the time, even some of the bits never published… and boy did those guys do some press conferences. It takes us on every holiday the band took, India, Spain, France, Kenya… We spend time in a catalogue of novels and art and avant garde; galleries, exhibitions, concerts, raves! The wives and Jane Asher I would have liked more of. That was my only disappointment. What about Julian and Zak?

Being horizontal we do look closely at the stiff competition of the time. The Beach Boys, The Who and The Kinks all push The Beatles further, deeper, better.

All of it is lived out in the shadow of LSD and the search for the meaning of life that seems to radiate from it. In the horizontal world of 1966 LSD seems to be the answer to the human question. Though even George Harrison admits that it is not the end but the beginning of life’s search for God.

Revolver, Strawberry Fields Forever, Penny Lane and the beginnings of Sgt Pepper’s Lonely Hearts Club Band all happen in this horizontal stew of 1966.

The research is so thorough that Turner challenges some of Paul McCartney’s take on his story, when moustaches came and why and when he first took LSD and what resulted. On his last record New, McCartney sang:

Now everybody seems to have their own opinion

But as for me I don't see how they can remember

When they weren't where it was at.

Well, Steve Turner wasn’t. We weren’t… but in Beatles ’66: The Revolutionary Year, Turner gets us as near to being there as any Beatles' book has ever gotten.

As I finished it, all I could think of was that I hoped Turner was working his way through 1967. How I would love that. I hope that he already at least in August. As take the title of his book on Van Morrison… Too Late To Stop Now!