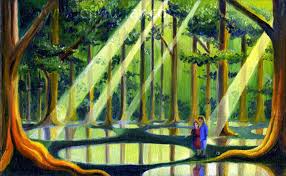 I love CS Lewis’s Magician’s Nephew. It is the first venture into Narnia and this journey was not through the Wardrobe but by magic rings transporting Polly and Digory through a manky pool into this big new world. Even better when I shared some of the following blog at a Sunday service in Campbell College recently, the headmaster took me straight out of the building took me to that manky pool. Right there in a school in East Belfast, where Lewis played as a boy.

Lewis, as a man of his age, becomes a little sexist in this transportation story. On arriving in Narnia, Polly, the girl, is immediately a little frightened and wants to jump back into the little pond and head back to safety and normality. Digory though, in his macho stereotype role, proves courageous and brave. With an adventurous spirit Digory declares, “There's not much point in finding a magic ring that lets you into other worlds if you're afraid to look at them when you've got there." I love that!

There are a lot of Pollys in the Church. Most of them men! Many people are happy to have the rings to the Kingdom BUT are concerned about safety. They are like the guys in Jesus parable who are given a talent and dig a hole and bury it. The Master returns and is angry with their conservative playing safe. The talent has not been lost and damaged but it is whipped away from them and given to those who were brave and a little risky with their talents.

Safety is not an attribute in the Kingdom of God. There is no one from Genesis to Revelation who plays it safe and gets any credit at all from God. It is the reckless, who risked and at times got it way wrong, find themselves in God’s list of heroes of faith in Hebrews 11.

When we are born again into a whole new life and Kingdom, God does not want us to remain in the maternity ward obsessed with that rebirth. He longs for those who enter the Kingdom to head further up and further in. He longs that they would grow up again and head out into that Kingdom, to discover the dangerous terrain that God would long to redeem. There would not be much point of Jesus coming to live and die and be raised to life again in order to let us into a new Kingdom if we are afraid to explore that new Kingdom when grace throws us right into it.

Thanks for this. Magician's Nephew is my fave. I find Lewis' Theodicy in it very helpful (Digory's mother dying). Also, and pertinent to my next point “What you see and what you hear depends a great deal on where you are standing. It also depends on what sort of person you are.”

Interesting Yin and Yang in Hebrews 11. Might be worth digging into further in a future post. The righteous/just live by faith, which at times leads them to risk a great deal, and sometimes resulted in torture and death (as you have pointed out), but not sure if I'd call "confidence in what we hope for and assurance about what we do not see" recklessness, any more than I would with Jesus' obedience to death. I don't think we're supposed to be reckless with our lives any more than we are supposed to be with the planet. Surely the issue is that we're supposed to be obedient (by faith). The same faith at times leads others to safety. Examples in Hebrews 11 of the latter are Enoch (who escaped death), Noah (who built a big boat to protect his family), Moses (whose parents hid him in a basket for protection, and who subsequently gained protection for a time by being presented as Pharoah's son), Israel which was protected in Passover and subsequently led to safety through the sea from their oppressors, and Rahab who escaped the death that others around her suffered.