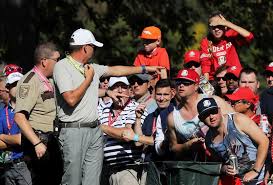 Well the Ryder Cup is over, including the shouting, and sadly there was a lot of shouting this past weekend. I am sure there are a few of the players, and a whole lot of the crowd, that will be regretting some of their antics a couple of days later. At least I would like to think so.

American crowds shouting “Get in the hole” after every shot has annoyed my head for many years BUT when it changes to “Get in the bunker” after a European player plays a shot something very wrong is going on.

I grew up playing golf. 36 holes a day every day of my summer holidays, captain the local youth team, won my share of trophies and got a couple of holes in one. Then life caught up and I haven’t played in years.

To fill the gap I played a lot of golf in my computer. I played all the great courses for free. Played them all under par. And never got rained on once! There was one other advantage. On the computer there was a button called a mulligan.

A mulligan has been defined as “a second chance to perform an action, usually after the first chance went wrong through bad luck or a blunder. Its best-known meaning is in golf, whereby a player is informally allowed to replay a stroke, even though this is against the formal rules of golf.”

Goodness imagine having that button in life. Imagine if every time we did something wrong we could press a mulligan and do it over.

As a Christian I believe that it what Jesus was on about when he talked about being born again. Christianity is all about the mulligan, the second chance the opportunity to start over. That is a wonderful thought in the error strewn life that I live. It is comforting to know that the mulligan is not a button on my computer but a reality in my spiritual life.

Maybe some of the players whose adrenaline rush caused lack of decorum last weekend… or the fans who shook the spirit of the game with their loud mouth bullying… or all of us whatever we do that we live to regret. Maybe we can reach for the mulligan… seek the spiritual second chance.