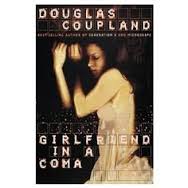 The novel that I have enjoyed the most, reflected on the most and quoted most in my sermons is Douglas Coupland’s Girlfriend In A Coma from 1998.

Growing up in West Vancouver Coupland says he little annoyed that his parents were so distant from any religion that he didn’t even have a choice to reject God. He suggests he has been trying to make up a belief system ever since.

I love books that give me insight into he times I live in and inspire me to live life in all its fulness. What Coupland creates in Girlfriend In A Coma is a fascinating social critique and full of prophetic hopefulness.

This is a novel about the ills of modern society, the healing and redeeming of such and the saving of souls. Briefly Karen falls into a coma in her high school year. Before doing so she has an apocalyptic vision of the future. She tells her boyfriend,

"It was just us, with our meaningless lives. Then I looked up close...and you all seemed normal, but your eyes were without souls".

Karen becomes the girlfriend in the coma and misses seventeen years of her life before coming out of it. Though the book deals with the changes from the world she fell asleep in, in 1981, to the world she wakened up again in in 1998 (she misses out on Princess Diana entirely), it is about the lives of her friends and the fufilment of Karen's vision, when they become the only people left on planet earth.

Another old friend who died in his early teens, Jared, appears as a friendly ghost, who reveals to them their "deep down inside" ills and redeems them. It is then he says that they can get the world back but only if they decide too. "You're going to have to lead another life soon; a different life.

"In your old life you had nothing to live for. Now you do. You have nothing to lose and everything to gain. Go clear the land for a new culture...If you are not spending every waking moment of your life radically rethinking the nature of the world - if you're not plotting every moment boiling the carcass of the old order - then you're wasting your day."

What inspirational words. "If you're not spending every waking moment of your life radically rethinking the nature of the world...then you're wasting your day."

Those words make me want to rush out the door and go change the world? I want to rethinking the nature of things? I want to boil the carcass of the old order? These are words of rebuke, in that I feel as I read them that indeed I have been wasting my day, and yet the rebuke comes with a motivating sense of encouragement to just go and stop wasting anymore time.

If I could inspire as much every Sunday morning I would be a very happy minister!