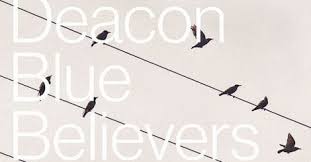 Three albums in four years! Come on! I don’t believe that Deacon Blue believed that this would happen but Believers is here and this Trilogy of albums (Hipsters, A New House, Believers) seems to not be so an Indian summer of a career as a brand spanking new and relevant contribution to a music world that as a band they walked away from over 20 years ago.

Believers glides in melodic flight, the harmonies make it soar and Jim Prime’s piano gives the updraft. These are are immediately accessible rock pop songs that bore their inedible beauty through your skull.

Ricky Ross has always added to his melodies a wonderful light touch of lyrical flair. His images, his rhyme, his look at the world creates three minute sermonettes that can nourish the soul without having to preach.

Perhaps it’s in Gone that we find the core thought of Believers:

Not just the ones you know

We are reluctant travellers

All trying to get home.”

Ross has said that the record was written in the shadow of newscast stories of refugees risking their lives to cross the Mediterranean for a better life. The greatest refugee crisis in history could not be ignored. Gone, Birds and the title track are most pointedly about beaches, waves, boats, movement, hopeful new beginnings and tragic endings.

Yet, the lyrics make the travelling inclusive of us all. Ross says, “This album is about the journey we all take into the dark. You come to that point in your life where – whatever you’ve been told, whatever the evidence you’ve been presented with – you just don’t know what the answer is. At which point you can only rely on instincts of your heart. You either take the leap or you don’t.”

So, Deacon Blue drop the weightiest depth charges in the gentlest ways into our journeying souls.

is not the way we came into this world

Or the way it ends

Is what lies between and what we do

With the time we get

There’s a hole in the middle

We gotta work out how to fill it in.”

You can’t know everything

You’re such an innocent soul

You can’t learn anything

Unless you let somebody show you

And you’ll not know everything

Even if you started right now

You must trust someone

Cause someday darling trust’s all you know”

(You Can’t Know Everything)

With Deacon Blue they can journey into that dark but they always carry light and hope and faith and indomitable love. The Believers believes in a better day:

Step on a boat

Go on a journey

May it take you to heaven

And never bring you back again

So you no longer fear the boatman

Or the swell of the ocean.”

Birds believes that “one day we’re going to be free” and:

We’re high above the waves of worry

We’re floating on the wind

Cause nothing can begin

To make us want to land again.”

This Is A Love Song maybe says it best of all:

Anything we’re going through

The lyric sheet is called The Believers Hymn Book. It’s a subtle pointer to the spiritual surmises, questions and insights that this collection of songs contain. There is little question that Ross’s faith is an underwriter here but he’s not proselytising. This is about belief in humanity, in the right choices to side with those whose journey into darkness needs our helping hand. It’s an inspirational piece of rock music to fire imaginations and make wake up calls:

“I can no longer watch

I can no longer wait

I can no longer hope

I have come awake.”

It is likely to bring Deacon Blue their highest chart placing since 1994. Who’d have believed it! I’m a Believer!