A RORY GALLAGHER STATUE AT THE ULSTER HALL? ABSOLUTELY! 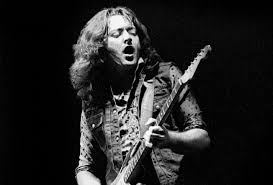 It seems that there is to be Rory Gallagher statue erected at The Ulster Hall in Belfast? My immediate response is - of course!

The Troubles rarely touched my hometown of Ballymena. Where we were impacted was in the fact that I rarely travelled the thirty miles to Belfast AND… that few rock bands came to Belfast in the 70s. Even our international soccer team played their home matches in England. Belfast was out of bounds.

One man was always dependable though. Rory Gallagher played a stint at the Ulster Hall every turn of the year. Year after year. He was your rock concert anchor when everything was being tossed around in the stormy seas around us.

So… as a seventeen year old in January 1979 Rory Gallagher became my first ever rock concert. The gig was actually delayed for a few days because of some weather issue with the Stranraer to Larne Ferry. In the end it was a Saturday matinee performance. I went up in the bus with my mate ran McConaghy, Frank Delargy and Michael Hyndman. And it was epic!

Ballyshannon born Cork man, Rory Gallagher is an under rated legend of rock music. A guitar player of astounding genius and dexterity he could finger dance on an acoustic guitar like the very very best but he he is probably remembered visually and sonically for the hard rock blues sounds that he emitted from his well-worn sunburst 1961 Stratocaster. That that guitar was born the same year as me is not lost on me!

Gallagher could make that thing talk and sing and rant and rage. At that first gig in 1979 Rory was touring Photo-Finish and probably for subjective reasons that is by far my favourite Gallagher record. Other albums might be more versatile and technically better in writing and playing. Maybe! Yet, Photo-Finish was special for me as it was perhaps his more commercial sounding piece. Shadow Play was actually released as a single and Shin Kicker just kicks everything in sight. Brute Force and Ignorance and Last Of The Independents also rock along on a catchy train track while Overnight Bag is an autobiographical song on the touring life.

It is over twenty years today since Rory passed away. It is a great time to reassess his genius. You can keep your Jimi Hendrix. Rory Gallagher was less flash but I question if even Hendrix could shape the strings of a guitar like Rory, and he sang the blues with a guttural authenticity. he used to shout at the end of songs or in introducing a song, “Hope you like it!” I loved it and having finally bought Photo-Finish, 36 years later, am beginning to love it again!