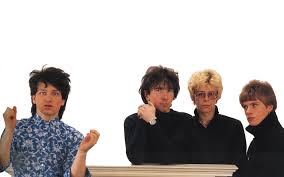 Listeners to my sermons, readers of this blog and converters with me over coffee will know that one of my favourite lines in the world and very very often repeated is Frederick Buechner’s definition of vocation; “where your deepest gladness meets the world’s deepest need”.

“I was young, not dumb

Just wishing to be blinded

By you, brand new

And we were pilgrims on our way…”

The anchor for the song is the band’s mate Guggi, who has the song Cedarwood Road dedicated to him later on the record, finding an exit door to sneak U2 in to see The Ramones. Teenagers finding their way in music this gig was seismic. Bono discovered another singer that, as he describes it, sang like a girl. All musical things became possible.

But, as with everything U2, there is more to “the miracle” and the pilgrimage than a career in music. If we tack this song out of its track listing order and hear the songs later on where Bono loses him mother, as does Larry, and the resulting volcano is bubbling, this is another song of redemption. Miracles are spiritual and for Bono the music is blended in to his discovery of faith and his pilgrimage ever since has been very much about both.

“I woke up at the moment when the miracle occurred

Heard a song that made some sense out of the world

Everything I ever lost now has been returned

The most beautiful sound I ever heard”

Bono has never taken more time or care over his lyrics than he does on Songs Of Innocence. Here is some of the evidence. This is succinct, subtle and solid lyrically and theologically. A young man lost and confused finds a miracle to make sense of it all.

Readers of this entire series will see the recurring them in my song choice that is a recurring theme in U2’s recent work. The line “The most beautiful sound I ever heard” is key. This is where sound and spirit really do become one. Bono has been known to love the old hymn Amazing Grace and has spoken of his love for the line “amazing grace, how sweet the sound”.

This is the time of Bono’s miracle for sure but as well as the punk figure of Joey Ramone the gem of Christian theology that is the unmerited favour of God’s grace to lost confused humanity is centre of the mix.

Bono goes on about it later in the song, “I get so many things I don't deserve”; grace defined beautifully again! U2 have awakened to transcendent interruption. The deepest gladness of their art will evermore be given to transform the deep need of their own lives and the world too.

The Miracle (Of Joey Ramone) is as close as we get to September 25th 1976 in Larry’s kitchen. The charts were bland that week, pop needed punk. When punk came from one direction, the Holy Spirit came from another and this band were pilgrims on their way to changing the world!