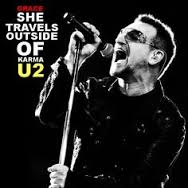 After Bono’s heavy involvement in Jubilee 2000 it was expected, by more than me, that some politics might make their way into the All That You Can’t Leave Behind album. When it came out there wasn’t so much. It was a very personal record.

Bono would later say that Grace was the social justice song. “What!” I shouted. Over time I have not only come to finally agree with Bono but also to have learned Biblical insight from it.

The key line, among many lines, for me is:

It's a name for a girl

It's also a thought that changed the world”

Indeed we named our daughter Jasmine Grace because we agreed.

It is this “thought that can change the world” that is the depth charge.

Let me come back to that…

Before I do, let me spend time in the personal impact of grace upon a life. If we listen to the opening lines we see echoes of U2’s exposition on the cross of Christ in I Still Haven’t Found What I’m Looking For:

“You broke the bonds

On Grace we hear:

“She takes the blame

She covers the shame

It could be her name”

Grace is Bono’s word in the past twenty years. He quotes the hymn Amazing Grace a lot. As I have written already in the Get Your Boots On entry in this series, when U2 sing about a sound, it is “Amazing Grace, how sweet the sound”. Bono was also influenced by a seismic Christian book written in 1997, Philip Yancey’s What’s So Amazing About Grace.

Bono himself has explained his theology of grace on many occasions. At the time of the record’s release he said: -

“I really believe we’ve moved out of the realm of Karma and into one of Grace…You see at the centre of the all religions is the idea of Karma. You know, what you put out comes back to you: an eye for an eye, a tooth for a tooth, or in physics – in physical laws – every action is met by an equal or opposite one. It’s clear to me that Karma is at the every heart of the Universe. I’m absolutely sure of it. And yet, along comes this idea called Grace to upend all that, “as you sow, so will you reap” stuff. Grace defies reason and logic. Love interrupts, if you like, the consequences of your actions, which in my case is every good news indeed, because I’ve done a lot of stupid stuff…I’d be in big trouble if Karma was finally going to be my judge. I’d be in deep shit. It doesn’t excuse my mistakes, but I’m holding out for Grace. I’m holding out that Jesus took my sins onto the cross, because I know who I am, and I hope I don’t have to depend on my own religiosity.”

It is in the song:

That is the gem at the heart of Christianity. God loves us. His love is unmerited. The word we use for that is grace. Pivotal verses in New Testament Scriptures explain this: “For it is by grace you have been saved, through faith—and this is not from yourselves, it is the gift of God— not by works, so that no one can boast.” (Ephesians 2: 8-9)

Back, though, to Bono’s “thought that can change the world”. What Bono is suggesting here is that not only is grade the key in the relationship between humanity and God. If we as humans then lived that grace in all our relationships, it would literally change the world. Grace is not just the key into the Kingdom of God, it is the life we live in that Kingdom.

That is exactly what the Old Testament prophets and Jesus were calling for. Grace towards the poor. Grace towards your enemy. The Shalom that is hoped for. The Kingdom of God on earth as it is in heaven. How can that be made more of a reality. Grace - it’s “a name for a girl/and a thought that can change the world.”