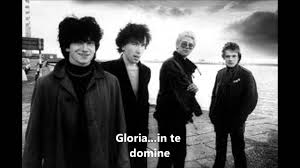 I remember the very second when I put the needle down on Gloria. It was my first seconds of hearing U2. Wow! It was like pumping an adrenaline rush right through my soul. Here was an explosion of spiritual rock sound that expressed all the vibrancy of my teenage faith. I was a pilgrim on my way!!!!

Gloria was not a new word in the rock canon. Van Morrison had written a two minute song in Belfast, 100 miles north of U2’s Dublin, fifteen years earlier. It has since become a song that in some senses encapsulates the 60’s. At that stage U2 might have been more influenced by Patti Smith’s rework of Morrison though what they were doing with a song of the same name was what Morrison would do a couple of years later in Inarticulate Speech of the Heart.

U2's Gloria was not about a girl, as Morrison’s song. It was about God, that Morrison was now singing about. It was an attempt to articulate worship to a transcendent presence that is very difficult to do. The mystery of God is hard to capture, confine and define. Even in the Bible writers like Jeremiah of the apostle John might start sentences with ‘It was like…’ trying to find images to do justice to God.

Gloria is not Dylanesque. It is a very simple, with Bono ad-libbing as he does across almost the entire album having lost his lyrics note book in the US before the recordings began. If the live on-mic writing effected Gloria and the entire album so did the fact that it was this point that U2 were most immersed in the Christian fellowship Shalom.

When I spoke to school friend of U2 and fellow Shalom member William MacKay, as I researched Walk On, he spoke of the spontaneity of the October recording sessions. William told me that the recording sessions often had a crowd from the fellowship around and worship was going on continually.

There is a youthful Christian exuberance that fuels Gloria and the entire record and that sense of spontaneous praise and the need to go into another language to express the spiritual intensity is evident here.

When Neil McCormick, another school friend but not Shalom member, wrote the CD booklet notes for the Remastered October release in 2008, he mentioned how the rehearsals for the songs were done in their old school Mount Temple and I wonder if this is what William has memories of. Whatever, October is a document of that phase of Christian history.

There is yet another factor at work here. As this album was being birthed U2 were asking themselves of there was a place for Christians in the rock industry. Someone in Shalom sensed God was telling the band to give up the music. There was a real wrestling going on especially with Bono and Edge as to whether they were called by God to be rock stars.

Here in Gloria you can hear the vocational searching – “only in you I’m complete” and “if I had anything at all I’d give it to you.” Eventually U2 would conclude that their vocation as in rock and how has the test of time proven them right. What would rock music be had they took the wrong option? What lives would they be living of they’d followed a different path?

Even as they wrestled here, a little confused, they conjure in their raw power and uncertainty a spiritual energy that has rarely ever been achieved in a hymn and that is what Gloria is... a really powerful hymn!

PS. can you imagine if Bono and Edge had listened to the prophecy to give up music. What is that person thinking today!