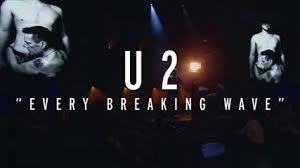 Every Breaking Wave is surely the best crafted song in the 40 years of U2. They had certainly taken their time perfecting it. It had been slated for No Line On The Horizon, had an outing or two on the U2360 Tour and was said to be one of the key songs on the Songs Of Ascent record that has yet to be released. It seems that OneRepublic’s Ryan Tedder was a co-producer who finally kicked it into its beautiful shape.

On my first listen to the record there was line the had my soul doing back flips:

“I thought I heard the captain’s voice

It’s hard to listen while you preach…”

Goodness, there is a line for a minister. The preacher, whether the ordained kind like me, or a lay one of faith or no faith can be so arrogant in our own opinions that we do not listen. Bono was again having a go at himself, something that those who judge him as arrogant or egotistical; seem to miss. Yet, it wisdom for us all, especially us preachers!

In a Rolling Stones article Bono described the song as being about the difficulty of "giving yourself completely to another person", with lyrical characters who are "addicted to sort of failure and rebirth.”

Like all U2 songs there seems to me to be other dimensions. That the song was to be on Songs Of Ascent, title taken from The Psalms, via Eugene Peterson’s book Long Obedience In the Same Direction I imagine, points to a spiritual intention. That “the Captains” voice was originally “the Master’s” voice suggest God is in the mix.

Author Donald Miller article spoke about the need for us to take our own initiative in our spiritual lives. It is this taking of initiative that I think Bono is on about in Every Breaking Wave.

My take on the song is that we can simply go with the waves. There is an undertow moulding, shaping and honing us. We can enjoy the waves. Seek them. The thrill of life. Materialism. Success. Yet, the song suggests that it never quite reaches what we ultimately need. Shipwreck and drowning are words in other parts of the songs.

Bono’s break from the breaking waves is to allow ourselves to be swept off your feet. As a result of Bono’s beautiful obsession with the Christian theology of grace I am thinking that the “swept off our feet” line is about the love of God. That is the intimacy that the shipwrecked souls in the song have craved; relationship with the divine restored.