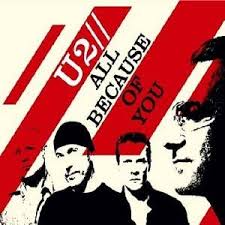 When How To Dismantle An Atomic Bomb was released, Adam told Blender magazine that All Of Because Of You, “could be about God.” He wasn’t kidding!

It could be about all kinds of people. It could be Bono’s dad who featured already on Sometimes You Can’t Make It On Your Own on the same album. It could be his wife Ali. Who has made him who he is?

If you take the clues elsewhere on the record and in the book that accompanies it then Adam might be on the money. “I AM” is the phrase that God used for himself when he spoke out of a burning Bush to Moses in the wilderness. Moses was not so sure about taking on his adopted Grandfather, The Pharaoh, who had oppressed the children of Israel so cruelly.

Moses was also unsure about how the Israelites will receive him and asks God who will I say sent me? God replies, “I AM WHO I AM. This is what you are to say to the Israelites: ‘I am has sent me to you’.”

Jesus used the phrase to hint at his true identity and to goad the Pharisees to whom the names for God were sacred. Another such name was Yahweh so for Bono to use “I am” so powerfully on the same album as Yahweh seems more than a little coincidental. There is another massive clue to this in the book that comes with the album which hint that an original lyric tot he song might have been “Take off your shoes/Who are you said Moses to the Burning Bush/I am the great I am/All because of You/All because of you.”

There are of course hints in the song itself. Claiming to be “a child of grace” claims some inheritance to God’s shaping. Elsewhere Bono is aware of the cracks in his life and that whoever this person is who makes him who he is could make him perfect again. The Christian theology of sanctification is that God works and shapes us until we are made perfect in Christ on the other side of this life.

“I'm alive/I’m being born” has Bono off onto another recurring thread through U2’s work. It has already got a mention in Love and Peace Or Else. In a verse of that song there is the juxtaposition of Bono’s experience the death of his father and the birth of his son. It finds Bono hoping that everyone will get to leave as we arrived, all wrinkly but with “a brand new heart.”

Born again is a phrase used by Jesus to describe to a Pharisee named Nicodemus what needs to happen in the process of our conversion to the ways of God. In recent history the more fundamentalist corners of American Christianity have taken ownership of the phrase and it has become synonymous with a right wing conservative political perspective.

Bono explained his feelings in some detail to Mother Jones magazine in 1989, “I never really accepted the whole "born again" tag. It's a great term, had it not been so abused. I accepted it on one level, in that I loved the idea of being reborn.... I think people should be reborn every day, man! You know, every day again and again and again! At 20 years old, this idea of "surrender every day," this idea of "dying to oneself" ... was so exciting! Then I came to America in 1981, the land of milk and the .357 Magnum. It blew my mind that this word "reborn" meant nothing.”  Bono however was not going to allow the truth of the concept to be lost in the misuse and abuse of the term. The “born again and again and again” actually becomes a line in the song Mercy which was eventually left off the album.

All Because Of You got an interesting placing on the Vertigo Tour. setlist. Quite a lot of concerts, particularly in north America ended with All Because Of You, Yahweh and 40. I loved this. A testimony, a prayer and a Psalm.

There is even more to this song though. The Xhosa language of South Africa has a powerful phrase called Ubuntu. It has played a major part in South Africa’s post apartheid years. There are many definitions. “I can only be me through you.” “I am me through you” “A person is a person through other people.” “I cannot be fully human without you.” My first listen to How To Dismantle An Atomic Bomb and there was the best definition of all - “All Because Of You I Am”.

Was I contriving this. No! Bono told, Chicago Sun journalist, Cathleen Fulsani how Archbishop Desmond Tutu had introduced him to the idea of Ubuntu. He said, "Essentially, what it means is 'I am because we are.' And it's about the interdependence, how we need each other and we have a stake in each other. One part of the community can't thrive truly while the other part of the community is in the dirt. In tending to them, we will be better off ourselves. It's that simple. Ubuntu.”