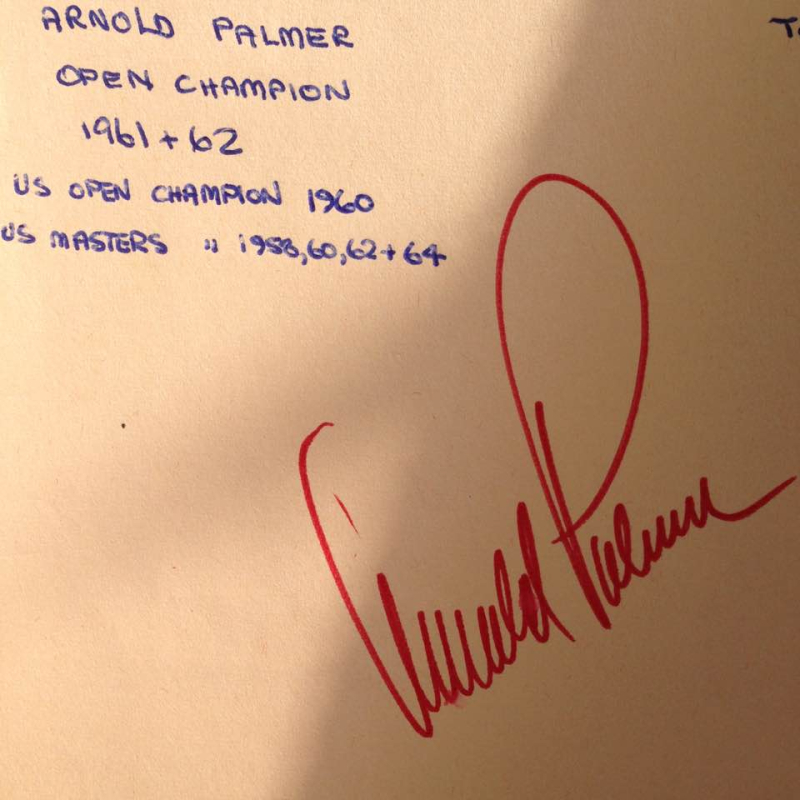 Arnold Palmer. Muirfield 1973. I remember standing in his space. It is what I did as an 11 year old. I was an autograph hunter. You found your way to your heroes and then stood in front of them with your autograph book primed. Sometimes you said, “Mr Palmer can I have your autograph please.” Other times you were in packs and whoever just signed the next one of a line of you, or more likely a scrum.

You didn’t always get. That same day I first got Palmer’s, Jack Nicklaus had refused, saying he didn’t sign during the round. Fair enough. I got his a few years later. Another time Peter Thomson, who wasn’t even playing at the time refused, making some snide comment to whoever was with him, that he wasn’t anybody. Well before it he was a five times Open Champion but he was right, after cold blooded dismissal of a teenage boy he was an absolute nobody from then on!

Palmer signed. My dad was as excited as me. Palmer was the King of golf. Oh Nicklaus had more majors but Palmer had revolutionised the sport. He has made it popular. His followers were known as Arnie’s Army. Even on that practice day at Muirfield he had a bigger following than Nicklaus, Jacklin and Trevino, the three real contenders in golf at the time. They actually finished first, second and third at that Open Championship.

No, Palmer was the man. Although Nicklaus won twice as many majors, Palmer did win nine between 1958 and 1964. Although Nicklaus would win seven more after that Muirfield Open and Palmer would never challenge again, it was still Palmer who was holding court with the fans.

I really never rated his swing and had gotten into golf almost a decade after his last Major win but I knew who was the pop star golfer. Palmer was a charismatic figure, a man who could draw the ordinary person into golf. It was he who turned the British Open into a major event again when he came across the Atlantic to play in it and win it in 1961 and 1962.

I have many autographs. I often flick fondly through soccer players George Best, Pat Jennings, athlete Ron Clarke, boxer Henry Cooper and golfers like Nicklaus, Watson, Ballesteros, Trevino, Jacklin, Norman and Faldo but Arnold Palmer’s was special. Arnold Palmer for goodness sake. It maybe never gets more legendary than that.