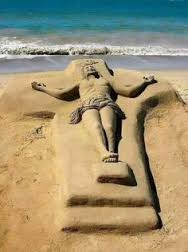 Over 20 years ago, I was leaving my Dublin office with my mate Chris. As we were heading out, Paddy who did the door for the Keep Fit Class that hired the hall beside the office said, “Off into The Flowing Tide lads”. Goodness we thought, Paddy has got all philosophical. What a great image of Dublin… a flowing tide. We laughed over lunch but I decided I could put Paddy’s phrase, Into the Flowing Tide into a poem. Chris conjured a song.

We were comparing notes on a car journey about week later and another friend says,

- That’s the pub across the road from your office.

We burst out laughing. Paddy wasn’t so philosophical after all! And yet, Chris’s song got written and my poem. I took the Flowing Tide image and set it in Holy Week.

On Friday Christians all over the world will remember the death of Jesus. I realised as I wrote my poem that Jesus died out there in the flowing tide of the city among thieves and gamblers and soldiers and scoffers.

Songwriter Martyn Joseph has a song that suggests that this is a strange way to start a revolution, dying for the world rather than conquering it.

But everything about this Jesus was kinda strange. The religious struggled with everything he did. He lived and died in flowing tide; among prostitutes, tax collectors, and enemies like Samaritan women and Roman soldiers. The apostle Paul wrote about Jesus being God but “emptying” himself to die for the world. the apostle John believed Jesus was God becoming “flesh and moving into the neighbourhood.” There’s that flowing tide again…

Leonard Cohen once introduced his song Aint No Cure For Love like this: -

"When the Prince of Peace was hanging from His final tree, He looked down at the people looking up at Him. He saw the faces of anger, envy, regret, despair, melancholy, animosity, hatred. He looked down at them and He felt a lever thrown in the universe and He knew that nothing would ever be the same again. And He knew for certain, He finally knew that there ain't no cure for love..."

A couple of years ago I saw a sand sculpture of Jesus on a Spanish beach. The sand artist had added luminous eyes. As I marvelled at the art I couldn’t help but be drawn to those eyes. It didn’t seem that anything or anyone could be out of their reach.

I believe that from the cross, at the end of Holy Week, no one in the flowing tide of humanity will be beyond Jesus loving gaze…