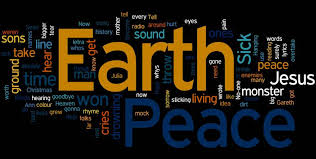 We need it now

I’m sick of all this

Sick of hearing again and again

Jesus this song you wrote

The words are sticking in my throat

Hear it every Christmas time

But hope and history won’t rhyme

So what’s it worth

This peace on earth”

As we celebrated this Christmas time we were aware that Burundi’s peace had unravelled and descended into violence and killing. Democratic Republic Of Congo and South Sudan are also volatile areas that Fields Of Life have invested interest in. Ugandan elections in 2016 have us on edge and then of course there is our own place with its own peculiar divisions. You can understand when you watch the evening news how U2 lead singer Bono had a crisis of faith as he watched 1998 Review of the Year and had a crisis of faith reflecting on the Omagh Bomb…. sick of the sorrow… sick of the pain… yet he hears that Scripture:

LUKE 2: 8 And there were shepherds living out in the fields nearby, keeping watch over their flocks at night. 9 An angel of the Lord appeared to them, and the glory of the Lord shone around them, and they were terrified. 10 But the angel said to them, “Do not be afraid. I bring you good news that will cause great joy for all the people. 11 Today in the town of David a Saviour has been born to you; he is the Messiah, the Lord. 12 This will be a sign to you: You will find a baby wrapped in cloths and lying in a manger.”

13 Suddenly a great company of the heavenly host appeared with the angel, praising God and saying,

“Glory to God in the highest heaven,

and on earth peace to those on whom his favor rests.”

Two thoughts from these verses. A reminder that the angels sang their song into a world just like ours. It was God’s interruption of peace into a violent world that the baby heralded. Indeed the baby would be introduced almost immediately to the military madness of our world when armies came seeking him. Bono’s response is like the Psalmist use of lament. It is a valid Christian response when countries we serve Christ in become embroiled in unrest. It is ok to ask why? To pray for help. To squint with the Spirit’s help see what God is doing when it is sometimes so hard to glimpse.

Second, is to realise the Gospel priority of peacemaking. The angels make it plain exactly what this baby came to bring; peace on earth. It has always disturbed me how lacking in zeal the vast majority of Northern Ireland Christians have been for peacemaking. As a friend once said, “We know our theology Steve but we just don’t read the Bible!”

Peace is one of the Bible’s big themes. Shalom. The well being of the world. It is a holistic word like the Greek word for salvation which means wholeness. As Jeremiah put it to those in exile, “Also, seek the the peace and prosperity of the city to which I have carried you into exile. Pray to the Lord for it, because if it propers, you too will prosper.”

The Zondervan NIV Commentary Bible defines this word peace, as the angels sing it, in 3 ways; personal peace, material peace and political peace. It could be marvellously paraphrased as changing lives, transforming communities and building hope. Whatever way we describe it, it should be the priority of the followers of the baby. Interrupting the war with the grace of peace; build schools… dig water wells… share the Good News of the Gospel.

PRAYER: Lord, as a the dawn breaks on a new year may we take the flicker born on the last days of the year and fan into flame the angels song to help you bring peace on earth.